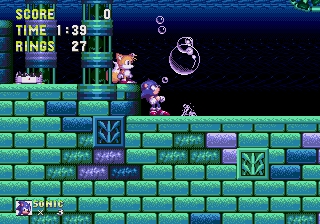 Simply put, air bubbles that float up from the sea floor in games with an Oxygen Meter. Grabbing them restores some or all of your Oxygen Meter.

Exactly how they're made underwater, and contain enough oxygen to allow the character to breathe longer, is virtually never elaborated on. You just have to not worry about it too much, because chances are, you'll need these bubbles either way to keep yourself from drowning when you're underwater.

If the character is somehow able to breathe underwater in ways that should actually be impossible for them to do (such as a human character with an overall lack of any scuba gear), then you have Super Not-Drowning Skills, instead.

Common in Video Games where there's no other way to survive underwater besides surfacing for air. Compare with Artificial Gill.