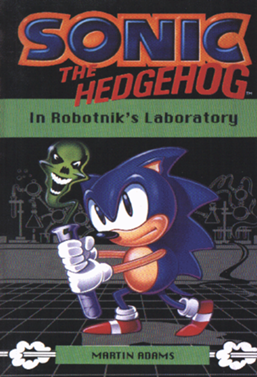 Sonic the Hedgehog In Robotnik’s Laboratory is a book written by the collective Pseudonym Martin Adams published in 1993. The first part of a series of books penned under that name at the time, starring the eponymous videogame character.

Sonic and Tails have been away on holiday and upon returning, discover that all of their friends have been kidnapped; turns out Robotnik is once again attempting to conquer Mobius. It’s up to our bodacious spiky sprinter and his awesome twin tailed fox, Tails, to save their pals, stop Robotnik and to get something to eat!

The Book Contains Examples of the Following Tropes: