Literature / Sonic the Hedgehog in the Fourth Dimension 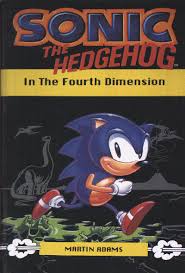 Sonic The Hedgehog in the Fourth Dimension is a book released in 1993 and the second title written by the collective Pseudonym Martin Adams.

Sonic and Tails must prevent Dr. Robotnik, who has discovered a time machine from changing the past, destroying the resistance and becoming supreme ruler on the planet Mobius. To help them traverse time they meet up with The Organizers, a group of extra-dimensional humans who guard the space-time continuum, who Robotnik had stolen his time machine from. They in turn help the Organizers fend off the Mythos creatures, a faction of mythological creatures fighting to gain a place in "reality", the dimension Sonic lives in, where logically they should not exist. The leader of the Mythos creatures, Arctur the Dragonkin, supplants Dr. Robotnik as the primary antagonist of this story.