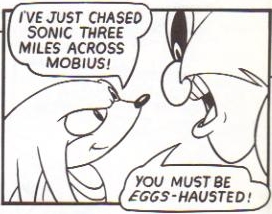 An infamous 90's joke book featuring Sonic the Hedgehog. Some scans can be found here.