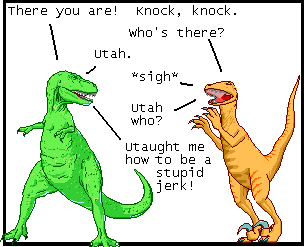 A common joke, told in the following format:
Person 1: Knock, knock
Person 2: Who's there?
Person 1: X.
Person 2: X who?
Person 1: [Terrible pun based on X].
Advertisement:

The format does tend to make it annoying, as the second person usually wants to hear a joke, rather than be forced to participate. But it is possible to make them funny in the right situation. Because this trope is so well-known, it's subverted more often than not, by replacing the punchline with an unexpected insult instead.

A second subversion is when person 1 isn't actually trying to set up a joke, but person 2 acts like it is. Generally this leaves out the 'knock knock' being said, with person 1 knocking on an actual door.

The Other Wiki has an article

on this plus examples, even prototypical ones from Shakespeare's time. A bunch of Troper-supplied examples can be found here.

The Magic Worm tells... or tries to make a knock-knock joke for Jack.

The Magic Worm tells... or tries to make a knock-knock joke for Jack.