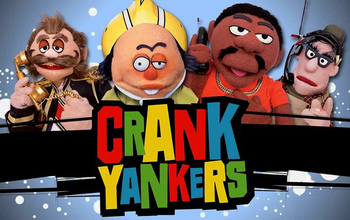 "You're on CNN! The show that leads into me is puppets making prank phone calls! What is wrong with you?"
— Jon Stewart to Tucker Carlson, The Daily Show
Advertisement:

Crank Yankers is a live-action and puppet show that used to air on Comedy Central and also for a brief time on MTV2 co-created by Daniel Kellison, Adam Carolla and the far better-known Jimmy Kimmel. It was revived in 2019 for a Season 5 and again for a in 2020 for a Season 6.

The premise: transcripts of real crank calls are re-enacted, cutting between the rooms of each end of the call (usually with lots and lots of Background Gags going on). The victims and pranksters are played by Muppet-esque puppets. When not airing prank calls, the show makes the puppets do raunchy explicit things such as go to gay bars, strip clubs, perform public sexual intercourse, enact racist stereotypes, etc. as a form of Foil to the Muppets. In the U.S., it is illegal to record and broadcast prank calls without both parties' consent... except for Nevada, which only requires one (i.e., the callers). So, nearly all the calls are made in Nevada. However, this made taping and broadcasting episodes fairly uneven due to many of the celebrities being based in California. The show also helped bring fame to Pete Dzoghi, a man who basically made a career out of doing prank calls before selling them as albums for money. In 2011, Adam Carolla pitched a hand-drawn animated spinoff centered on his character Dick Birchum to Fox called The Birchums but FOX refused to pick it up.

Crank Yankers has these following examples of tropes, Yaaaaaaaaaaaaaaayyy!!!