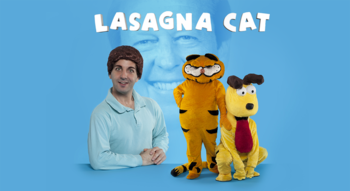 One man lives with the burden of making the entire world laugh every day... It's time we showed him just how much we care.
Advertisement:

Lasagna Cat is a series of YouTube videos created by Fatal Farm. All of them follow the same formula: reenacting a Garfield strip as a live action video, and then showing a bizarre music video or "tribute to Jim Davis" usually relevant to the preceding comic, which then usually ends with the camera focusing on a mugshot of a smiling Jim Davis.

The original videos were posted in 2008. After nearly a decade of inactivity, a very short teaser was uploaded in February 2017, followed, two months later, by all 27 episodes of Season 2 (plus a promo), with possibly more to come

Check out the official site here