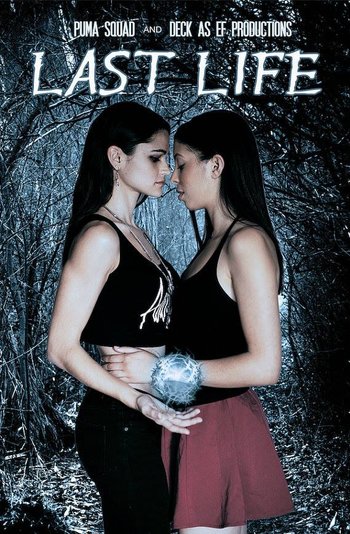 Sloane: “I don't need a plan. I've got Tequila.”
Advertisement:

Last Life is an American supernatural romance and dark Urban Fantasy webseries that premiered on YouTube in the spring of 2015. It is produced by a small studio outfit called The Puma Squad, headed by co-creators Elesha Barnette and Kathy DiStefano. Kathy also plays Sloane, the main character, who is currently living the last life for which the series is named. Also starring Nancy Cooney as Taylor, her soulmate.

The story is essentially summarised by Sloane’s opening monologue, so just to add a few more details: Yes, Sloane is a witch from the Bloodborne coven. Yes, she’s lived many lives, as this series is a Reincarnation Romance, and yes, all she wants is to be reunited with Taylor, her soulmate and fellow Bloodborne witch, with whom she’s shared all those past lifetimes. But Taylor has no memory of her past lives, and thus no memory of her prior relationship/s with Sloane, whom Taylor last knew as a man named Rick, who died in 2012.

Meanwhile, the ancient battle between good and evil rages around them both, as the Alina—the “good” witches, on the side of the light—have been drugging Taylor all this time, working to make sure she doesn’t get back her memories, and on the flipside, her fellow Bloodborne (obviously on the dark side) want her dead, and permanently. For Taylor doesn’t know it yet, but she is one of the most powerful of dark witches in history, and it has been prophesied that when she finds out who she really is, she could bring about The End of the World as We Know It …

The series has in all a total of three seasons, with the final one debuting in late June 2019. Tentative plans have also been discussed for a possible spin-off, and/or even a graphic novel. Watch all three seasons, and view all the extra material (behind the scenes footage, interviews, trailers and bloopers) here, on the Puma Squad's YouTube channel

Not to be confused with the Life SMP, which is known as the Last Life SMP in its second season.

“I’m Sloane, and I’m part of an ancient coven of dark witches called the Bloodborne. I have lived many lives, with one mission: to reunite with my soulmate. The last time I died, I broke the rule. And now this is my last life.”