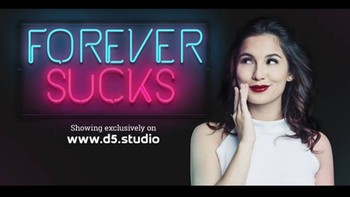 Izabel is a Filipina call-centre agent. She bickers and banters with her millennial officemates. She handles infuriated calls from foreigners. She sets off feelings in her team leader. And she also happens to be at least 150 years older than anyone in the office, drinks blood for survival, and can't go out in the sun.

That's right, Forever Sucks, a Filipino Urban Fantasy webseries from Digital 5 (D5) Studios, the Internet arm of media network TV-5, centres around a 170-year-old vampire who happens to work at a call centre, and why wouldn't she? The hours are perfect for night owls like her. It doesn't make interacting with humans any easier though.

The entire 3 seasons so far are available here

, along with the featured soundtrack.

Has earned fan comparisons to Orange Marmalade, a Korean manhwa and later series about a vampire also adjusting to live in human society.