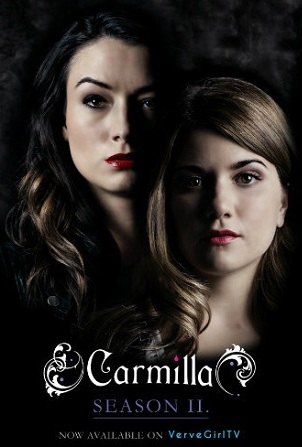 Carmilla is a web series adaptation of the book of the same name set in the modern day. It ran from 2014–2016.

19-year-old Laura Hollis has left her hometown for the first time to attend Silas University, which boasts its own Gnostic Mathematics department, many clubs for the students to enjoy, like the Alchemy Club, and an extensive library where the books will search for you. But then things get weird when Laura's roommate disappears without a trace one night, which no-one seems to notice or care about. Laura decides to investigate herself, and with help from her dorm managers Perry and LaFontaine, and Danny the friendly TA, uncovers a similar string of disappearances and a seedy underbelly of danger lurking underneath Silas.

Meanwhile, her new roommate Carmilla keeps stealing her chocolate! Oh, and she might be a vampire targeting Laura as her next victim.

The series progressively casts the net of danger wider and wider, bringing in bigger baddies and tougher dilemmas, but it never quite leaves behind its love of quirky comedy and lesbian drama. The tone echoes postmodern Urban Fantasy like Buffy the Vampire Slayer.

It concluded in the fall of 2016, with three good-sized seasons and a large amount of extra material. The Carmilla Movie, a movie set five years after the Grand Finale, was released October 2017.

The whole series is available to watch

on YouTube. It can also be purchased on VHX.

note Season 3 is available with purchase of the movie. Season 0 is exclusive to Youtube. The movie is available for purchase here.

, was released during Season 1 and is about Laura's dorm neighbor Mary Ringwold.

Has its own Character sheet.

ONLY SPOILERS FROM SEASON 0 AND SEASON 3 WILL BE WHITED OUT.

Laura is not happy with her new roommate Carmilla.

Laura is not happy with her new roommate Carmilla.