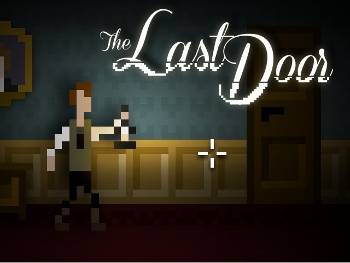 "Malum in se." note A Latin phrase meaning "evil in itself."
Advertisement:

The Last Door is an episodic horror Adventure Game series by the Seville-based indie developer The Game Kitchen. Set in 1890s Great Britain, it puts the player in the shoes of Jeremiah Devitt, a man who's just received a strange and urgent letter from his old school friend, Anthony. When he reaches his friend's house, he finds things in a strange state: the house is seemingly deserted, spooky notes are scattered on the floor, and there's a murder of crows devouring... something in an enthusiastically bloody way in the backyard. Obviously, Jeremiah has some questions and sets out to get to the bottom of this mystery. Using a traditional Point-and-Click Game layout very much akin to any given LucasArts Adventure Game, you'll guide Jeremiah as he unravels the mystery of what's occurred and why.

The game is played in chapters and takes Jeremiah from Anthony's estate to their old school and deep into the frightening past they shared. A great deal of attention is paid to the thoroughly unsettling atmosphere of the game, particularly in regards to the music and the basic quality of the graphics. The game's developer, The Game Kitchen, has indicated that two of their leading inspirations were H. P. Lovecraft and Edgar Allan Poe. It shows.

The game can be bought through Steam or be played on its official website here.

The complete game consists of two "seasons" of content. In addition, several "minisodes" have been produced for the "Collector's Edition" version of the game. The two seasons consist of the following episodes: