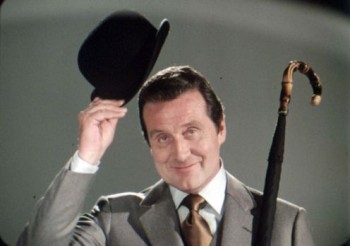 A bowler hat, or derby, is a rounded felt hat commonly worn from the 1850s to the early-to-mid-1900s, especially in Victorian Britain and The Wild West. They were invented as a more compact alternative to a top hat, with the small size, round shape, and harder materials being selected for their original purpose — protecting riders' heads for equestrian country sports (which frequently involved going through trees or simply falling off one's horse). Bowler hats were once considered the national hat of England, and used to be associated with the upper-middle class there, especially with bankers, in the early half of the 20th century.

You can count on a character who wears a bowler hat to be refined (unless, say, he's a villain in a western). In fact, he might even wear a monocle to show his culturedness. The bowler hat hung on in the City of London into the 1960s. In the early 1960s, new recruits to some City law firms got an allowance for the purposes of buying a bowler. A lesser known fact about them (amongst non-wearers) is that they're quite hard (because of both the heavy felt and the shape), which meant that construction foremen (or businessmen visiting a construction site) would sometimes wear them instead of hard hats.