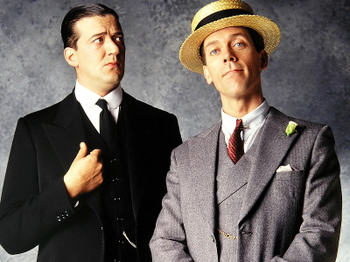 Wooster: Why is it, do you think, Jeeves, that the thought of the "little thing" my Aunt Dahlia wants me to do for her fills me with a nameless foreboding?
Jeeves: Experience, sir?
Advertisement:

A TV Series starring Stephen Fry and Hugh Laurie and based on the short stories and novels of P. G. Wodehouse, Jeeves and Wooster is set sometime between the wars and focuses on Bertie Wooster, an affable but not overly bright young chap with an unfortunate tendency to get accidentally engaged to every woman he so much as looks at, while his valet (not butler), Jeeves, is the brains of the operation, suggesting the various schemes that help Bertie and his friends get out of trouble. Well sometimes. Sometimes, he gives them what they need, not what they want.

The plots tend to be quite similar — a friend of Bertie's is in love but they lack the courage to propose/their family doesn't approve of the match/they've forgotten the girl's name and address, and they require Bertie to propose in their stead/pretend to be engaged to their fiancée/pose as a burglar to make them look heroic when they foil him; this will go wrong and Bertie will get unwillingly engaged to someone, or be caught stealing something, or both. At the last minute everything will turn out all right and Jeeves will explain how he solved everything. Grateful at being saved from the altar or prison (or both) once again, Bertie will give permission for Jeeves to book the cruise he's been angling for, or destroy the hat of Bertie's he dislikes; inevitably, Jeeves has already done so.