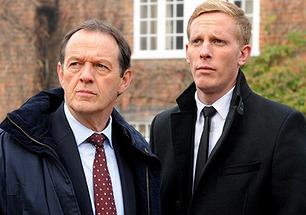 Hathaway: Has Oxford changed much since you've been away?
Lewis: No. It changed before I went.
Advertisement:

Lewis (2006-2015) is a spinoff series of Inspector Morse. The series centers around Robert "Robbie" Lewis (played by Kevin Whately), who, in a five year gap after the events of Inspector Morse, has lost his wife in a hit and run accident. Perhaps not coincidentally, this Lewis is a lot more argumentative than he used to be. Thanks to his promotion from Sergeant to Inspector, he once more finds himself pottering around Oxford, solving murders and the occasional government plot.

Lewis is joined by the young Sergeant James Hathaway (played by Laurence Fox) a former priest-in-training, who gave up his education and joined the police instead. He's tight-lipped and focused, much like Morse in his prime, but has a weak spot wherever the fairer sex is concerned. Lewis loves to wind him up, partly out of resentment toward his younger (and perhaps over-qualified) protégé, but mostly just to ignite some passion in the chilly detective.

The other regular cast members are Lewis's superintendent, Jean Innocent (played by Rebecca Front), and pathologist Laura Hobson (played by Clare Holman), the only other returning character from Inspector Morse.

The show originally ended after seven series because both lead actors wanted to move on. The final episodes showed Lewis deciding to retire and Hathaway leaving the force after becoming disillusioned with police work. It was Un-Cancelled a year later, however, and returned for an eighth series in 2014 with Hathaway returning to the force and receiving a promotion while Lewis comes out of retirement due to boredom.

The ninth and last series was broadcast in 2015.