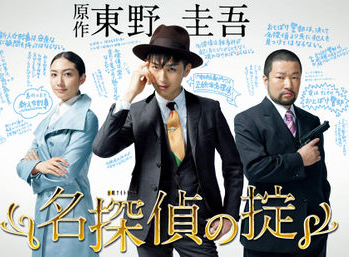 Lessons for a Perfect Detective Story (Meitantei no Okite) is a Japanese book by Keigo Higashino, adapted into a ten-episode Japanese Series.
Advertisement:

The story revolves around Amateur Sleuth/Private Detective Tenkaichi Daigorô, the main character of the fictional Tenkaichi Series, as he solves various criminal cases while being bound by the "conditions" of the Detective genre (which suspiciously seem like a different word for "tropes"). Two others are aware of this: Ogawara Banzo, fully aware of his role as the Clueless Detective and Tenkaichi's sidekick; and Fujî Mana, the female rookie officer and potential love interest for Tenkaichi, who slowly learns about the various conditions they have to live by.

Knowing they live in a fictional series allows them to enter a "backstage" room that only they can see to discuss the story and the "conditions" within the Tenkaichi series while standing outside of it. Each episode revolves around a different murder mystery theme/trope and discussing and playing with all the tropes that come along with it.