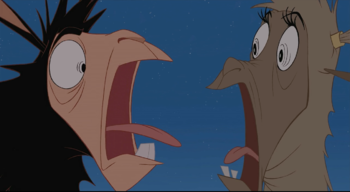 Somebody is startled by another — and screams. The surprise from being screamed at makes the other person scream (usually even louder than the originator), which leads to the first person continuing to scream, which makes the other scream even more.

If more than two people are involved it can end up with a room filled with people screaming in surprise to no end, with no one really knowing why. The Only Sane Man may have to step in and restore order somehow. Rule of Funny prevails—don't expect this to end simply because one or more characters, say, have to take a breath.

Contrast "Everybody Laughs" Ending, Contagious Laughter, and Everybody Cries.