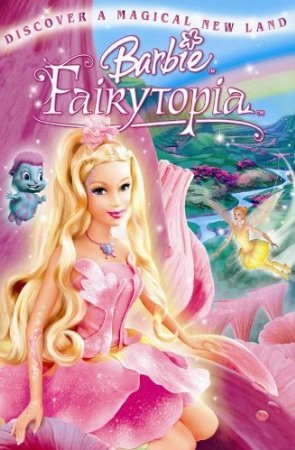 You know, you have the rainbow in your eyes. That's a sign you're destined for great things.
Advertisement:

The Barbie Fairytopia series is a trilogy of animated Barbie movies, released annually from 2005 to 2007.

Barbie Fairytopia features Elina, a fairy who gets picked on by other fairies because she is the only fairy who doesn't have wings. When an evil fairy called Laverna starts capturing the seven guardian fairies in Fairytopia, and releases a disease that affects creatures with wings, Elina decides to go find Azura, one of the guardian fairies who has not yet been captured. Along with her pet fluffball Bibble she goes on a journey to save Fairytopia.

The first sequel, Barbie Fairytopia: Mermaidia, takes place shortly after the events of the first movie, where Elina, who now has wings discovers that Nalu, the merman prince she met in the first movie has been captured by Laverna's henchmen because he knows the location of a berry that grants whoever eats it immunity to all magic. Teaming up with Nori, a mermaid who has a crush on Nalu, she goes on another journey to save her friend and once again save Fairytopia from Laverna.

In the second sequel, Barbie Fairytopia: Magic of the Rainbow, the guardian fairies have been told to find apprentices, and the guardian fairy Azura asks Elina to be her apprentice. Elina goes to the Crystal Palace where she, and six other fairies will be taught the flight of spring. However, Laverna is still seeking revenge...

What makes you different makes you special.
Trust your true self.
Together we're strong.
— Barbie