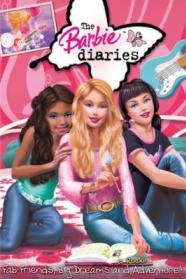 The eighth entry in the Barbie direct-to-video film series, it's Barbie meets Mean Girls with a touch of vaguely defined fantasy in this installment, an odd-movie-out in Barbie's usual fantasy oeuvre. It was released on May 9, 2006, in between Barbie Fairytopia: Mermaidia and Barbie in the 12 Dancing Princesses.

In this one, Barbie and her friends are a Garage Band; the main action takes place at her school. The three have started their sophomore year and Barbie looks forward for everything to change for her.

And, as in any American high school, there is the Alpha Bitch, who is in this case named Raquelle. As the movie opens, Barbie receives the position of Raquelle's official toady for the school TV news show. And, as usual, Barbie has a crush on Raquelle's boyfriend, Todd, who she thinks is her Secret Admirer. Luck turns to Barbie's side for once when she receives a mysterious diary which can only be unlocked with its included charm bracelet, and Todd not only breaks up with Raquelle, but also hooks up with Barbie in the same day; Barbie soon discovers the diary is magical, and whatever she writes in it is coming true. This leads to a rise in popularity for Barbie and she effectively dumps her own friends in favor of developing a Girl Posse with members stolen from Raquelle. But when Raquelle steals the bracelet, Barbie feels like she lost all her magic until her friends come together.

Of course, it turns out okay when it turns out the Secret Admirer is her childhood friend Kevin, and she makes up with her friends to finish the movie with a song.

The opening to The Barbie Diaries.

The opening to The Barbie Diaries.