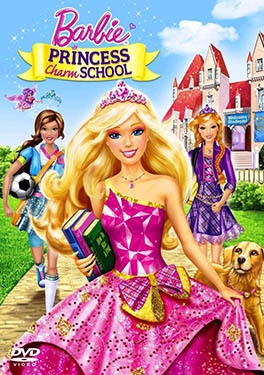 'Barbie: Princess Charm School is a Direct to Video movie released by Mattel in 2011. It is preceded by Barbie: A Fairy Secret and followed by Barbie: A Perfect Christmas.

Barbie plays Blair Willows, a lowly waitress in the kingdom of Gardania, trying to get money for her sick adoptive mother. When her adoptive sister Emily placed her name in a lottery, Blair didn't expect to be a student at Princess Charm School, a school dedicated to teaching rich girls to be princesses and ladies royal.

Blair decides to go into the school in hope of getting the status of lady royal to help her family. However, she is humiliated from time to time. When Dame Devin suspects Blair looks a lot like the kingdom's missing princess, she goes out of her way to keep her from taking the throne to ensure her daughter Delancy becomes the new ruler of the kingdom in place of the late royal family. Blair soon realizes she might be the lost princess Sophia, and she and her friends begin an adventure to get the Gardenia Crown.

There’s a princess in every girl.
— Barbie
Feedback