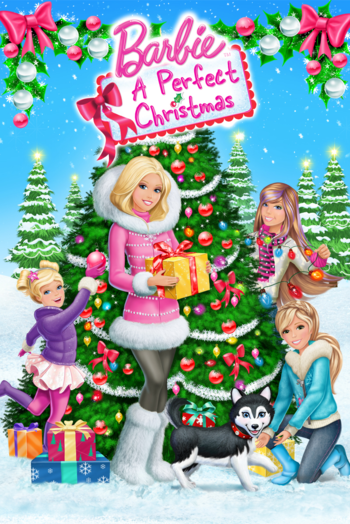 Part of the Barbie series of Direct to Video films, this is the second Barbie Christmas movie, and the first that stars Barbie and all of three her sisters (Skipper, Stacie and Chelsea) together. This movie also follows the same continuity as A Fashion Fairytale and A Fairy Secret, since Aunt Millicent (from A Fashion Fairytale) makes an appearance.

Barbie and her sistersnote Skipper, Stacie and Chelsea are planning to spend the holidays in New York City with their Aunt Millicent. However, a big snowstorm cancels their flight and they have to make a stop in Minnesota, where they stay at a hotel called the Tannenbaum Inn. Barbie and her sisters are given special hospitality by the residents and arrange a big concert, all while learning that, even if they don't make it to New York City, being together is more important and spending time with the ones you love is what makes it "a perfect Christmas."

Advertisement:
Being together is what makes a perfect Christmas.
— Barbie