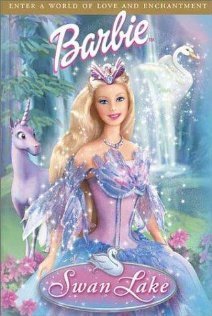 Barbie of Swan Lake is a Barbie adaptation of Swan Lake. It is the third installment in the Barbie film series, releasing in 2003 in between Barbie as Rapunzel and Barbie as the Princess and the Pauper.

Much like other fairy tale adaptations in its series, this version expands the plot. Odette, a shy baker's daughter, is lured into a magic forest by a talking unicorn named Lila. While there, she frees the Magic Crystal from its placement in a tree, and is told by the Fairy Queen that the one who takes the Crystal is the one chosen to defeat the evil sorcerer Rothbart.

Odette thinks there's been a mistake, as she's not particularly brave or powerful, but soon finds herself with no choice but to confront Rothbart when he appears and turns her into a swan. Protected by the Crystal from magical harm, but unable to return to her human form except at night, Odette must find a way to break the curse and save the forest—and perhaps fall in love with the spirited Prince Daniel while she's at it.

You're braver than you think.
— Barbie