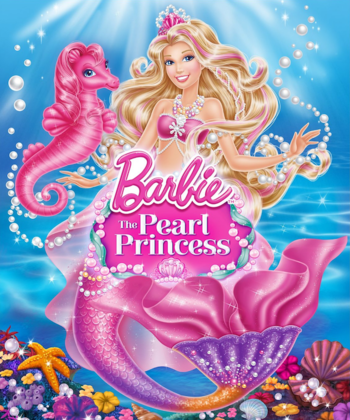 Barbie: The Pearl Princess is a Direct-to-DVD Barbie movie released in March 2014, though it had gotten a limited theatrical release in some theaters. In the Barbie filmography, it is preceded by Barbie & Her Sisters in a Pony Tale and followed by Barbie and the Secret Door.

Barbie stars as Lumina, a mermaid girl with the power to manipulate pearls with her mind. While she's rarely ventured outside her secluded home, Lumina has always wanted to, and soon finds herself working in a mermaid salon customizing fabulous hairstyles. When Lumina gets the chance to dance at the royal ball, it seems her dreams will come true—until the evil Caligo blackmails her adopted mother, Scylla, into poisoning the king and helping him claim the throne. Lumina and her friends must work together to stop him, and her pearl powers may prove key to saving everyone.

Always leave things better than you have found them.
— Barbie