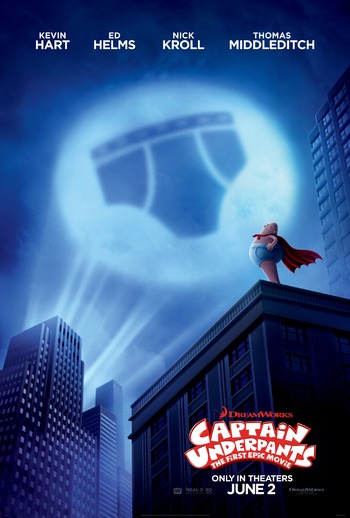 Captain Underpants: The First Epic Movie is a DreamWorks Animation film based on the Captain Underpants book series by Dav Pilkey. George Beard (Kevin Hart) and Harold Hutchins (Thomas Middleditch) are two scheming fourth graders whose goals are to play pranks, hide in their secret treehouse and write comic books. But when they accidentally turn their megalomaniacal principal Mr. Krupp (Ed Helms) into their comic book character — Captain Underpants — their elementary school life suddenly becomes anything but elementary.

Rounding out the cast is Jordan Peele as Melvin Sneedly, the nerdy nemesis of George and Harold; Kristen Schaal as Edith, the school lunch lady (and Mr. Krupp's love interest); and Nick Kroll as the insidious villain, Professor Poopypants.

Released on June 2, 2017, Captain Underpants is the final DreamWorks Animation film to be distributed by 20th Century Fox after the former's acquisition by NBCUniversal and before the latter's acquisition by Disney and its renaming into 20th Century Studios, all DreamWorks Animation movies from How to Train Your Dragon: The Hidden World onward were distributed by Universal.

George and Harold bond over the 'Uranus' joke.

George and Harold bond over the 'Uranus' joke.