Anime / From Up on Poppy Hill 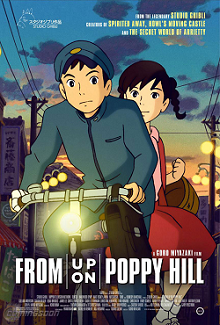 "It seems the whole country is eager to get rid of the old and make way for the new.
But some of us aren't so ready to let go of the past."
— Umi
Advertisement:

The heroine, Umi Matsuzaki (voiced by Masami Nagasawa), is a high school girl in Yokohama of 1963. From her home on Poppy Hill overlooking the bay, she raises flag signals every morning meaning "I pray for safe voyages". One day, she receives an answer, as it turns out, from Shun Kazama (Junichi Okada), one class above her.

In preparation for the 1964 Tokyo Olympics and following in step with an economic boom, Japan is quickly modernizing amidst growing student movements and social unrest, often razing the old to make way for the modern. At Umi's school, the old building of the Culture Club, nicknamed "Quartier Latin" by the students, is scheduled to be torn down. Can the students, including Umi and Shun, really do anything against this decision?

Disney didn't want to release it because of certain themes the movie touches upon, including incest, and they have a strict "no cuts" agreement with Ghibli which meant they couldn't edit any part of the movie, which left the job to GKIDS as their first Ghibli film. Eventually, a dubbed version was released into American theaters March 2013, with a DVD and Blu-Ray release following that fall.