Curious as a Monkey 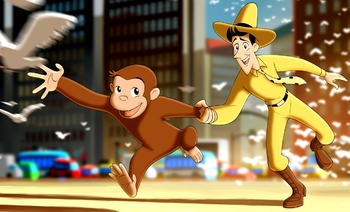 Something caught this little monkey's attention...
"Oh, what's that? What is that? Ohh, that thing has numbers on it! Hey, look at that thing. No, that other thing."
— The Curiosity Core, Portal
Advertisement:

A character, usually a child, who is always monkeying with things to see how they fit together, or work, what they are made of, or what they can do. (Always in total innocence.) Generally found with assorted parts of a now-out-of-commission machine scattered about his feet. Or attempting to find out what the Big Red Button does. Or poking the Disaster Dominoes. Truth in Television for anyone who's seen the aftermath of a bored six-year-old with any form of tool.

Even for this person, Curiosity Is a Crapshoot, but generally turns out well... for the monkey, at least. The Fool often displays these traits when he isn't an Idiot Hero: given their ability to throw a Spanner in the Works of even the most well-oiled machine, they can sometimes become an Invincible Incompetent Accidental Hero throwing the Clock King's perfectly planned scheme into smoking rubble simply by asking the wrong questions and pulling levers to see what they do. This form of the trope can sometimes be Truth in Television for gamers who accidentally discover Easy Level Tricks by poking at the scenery and AI.

Usually the Cheerful Child, and often a Wide-Eyed Idealist when given deeper character development. The Smart Guy, Gadgeteer Genius, or Wrench Wench can show signs of this in the presence of machinery although they usually do less damage. (She may even improve it!) In more cynical works or when used for plot development, a curious monkey can be an Unwitting Instigator of Doom, because they have to know what exactly IS in the box they aren't supposed to open. An excellent way to justify a Nice Job Breaking It, Hero moment, and especially common in the cosmic horror genre.

Compare with the Constantly Curious, who ask questions for the same reason. A character Curious As A Monkey tends to be a less persistent nuisance, but makes trouble on a much grander scale. Sometimes, they overlap, when the child has moments of acting like either.

Contrast Little Jimmy, who has no characterization except his ignorance. Compare/contrast Lethally Stupid and Too Dumb to Live who act out of stupidity rather than curiosity, and are far more likely to get themselves and everyone around them killed. The Lethal Klutz does the same thing by accident—God help you if this one overlaps with Curious As A Monkey. For actual monkeys fooling around, see Silly Simian and/or Mischief-Making Monkey.