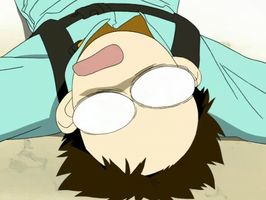 When shocked or stunned emotionally, mentally or physically, the character's eyes are briefly replaced by blank white disks with sloppily-scrawled black "borders" around them. Functionally equivalent to the American Circling Birdies. Can be combined with Blue with Shock for extra impact. Glasses-wearing characters sometimes use (Not So) Scary Shiny Glasses instead. Note that because the pupils and iris allow light to enter the eyes, characters with blank white eyes should be blind.

This is a relatively recent trope; almost all shows or manga using it have shown up in the 21st century. In even more recent media, this trope has seen a much wider range of uses, ranging from making a character look funny, depicting a frightening berserker rage, depicting someone knocked out or dead, or simply depicting eyes on a character too far away to be drawn in detail.

See also Prophet Eyes for characters whose eyes are always completely white, and Color Failure for when they lose color all over. In some cases, it can also overlap with Dies Wide Open.

You can sort of do this if you roll your eyes into the back of your head.