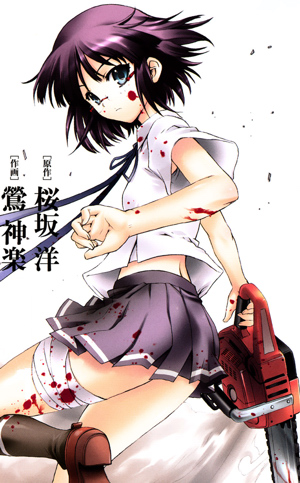 Hell hath no fury...
"This is all that is left. Wait for me, Takumi. I will convey, with all my might, my thought and feelings to you. First, by killing you... and then, killing myself."
Advertisement:

Saitama Chainsaw Shoujo is a short story by Japanese science fiction author Hiroshi Sakurazaka. It was later adapted into a short manga written by Sakurazaka and illustrated by Kagura Uguisu, which was serialized from June to December 2008 in Monthly Comic Dengeki Daioh magazine. The original story was the 2004 winner of the "Hayakawa's S-F Magazine Reader's Award" for Best Japanese Short Story.

The story follows Fumio Kirisaki, who is an Ordinary High-School Student in nearly every way - she is not particularly popular, intelligent, or attractive. Her greatest joys in life are reading her extensive manga collection and spending time with Takumi, her first love and current boyfriend.

Fumio's life takes a turn for the worse one afternoon when she finds her boyfriend in the arms of an eccentric New Transfer Student introduced to their class that very same day. Crushed and confused, she seeks the advice of her only friend Kaoruko Odagiri. When Fumio is seemingly abandoned by Kaoruko after rejecting her friend's somewhat odd advice, her depression only deepens.

Having given up hope, the now friendless and heart-broken Fumio decides on the only sensible solution she has left - tomorrow when she goes to school she will take her family's chainsaw, which she will use to kill Takumi and then herself. And God help any of the other students who choose to stand in her way.

Tropes in Saitama Chainsaw Shoujo include: