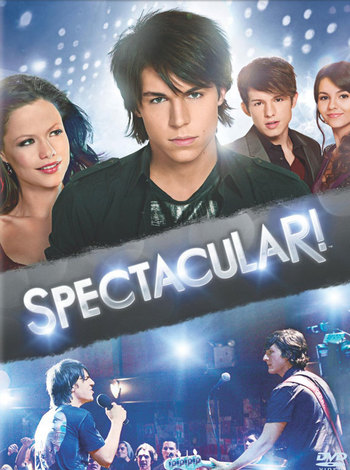 Spectacular! is a 2009 film released by Nickelodeon.
Advertisement:

After being ousted from his band, troubled pop star Nikko Alexander (Nolan Gerard Funk) vows to make his way to the top on his own. But his goal takes an unexpected twist when he meets Courtney Lane, the leader of show choir Spectacular!, and insists he join as the co-lead to help them in a regional competition against her rival Tammi, who's the leader of the rival group Ta-Da. When the two instantly hit it off despite their different ways, Nikko discovers the importance of teamwork.

This telefilm was Nickelodeon’s attempt to cash-in on the success of Disney Channel’s High School Musical movies, but only performed modestly in the ratings when it premiered which killed any future sequel or franchising plans.

Also of note, this movie is the rare musical where all the songs take place as performances In-Universe as a la Source Music opposed to the usual “breaking out into song” exposition the genre is known for.