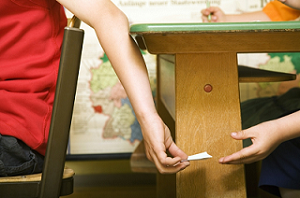 When class is in session, one student will pass a note to their crush, usually during a lecture. They must usually rely on other students next to them due to being far away from their crush.

Unfortunately, the teacher usually finds out as the note is being passed and confiscates it, as this is often forbidden in the classroom. The teacher may even force the offending student to read it out loud to the rest of the class, resulting in embarrassment.

It's becoming something of an Aluminum Christmas Tree as younger and younger kids have access to cell phones and texting.