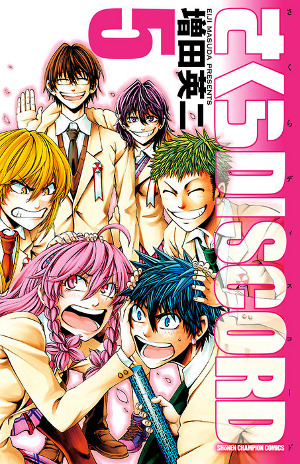 When he moves back to the city he had left four years ago, Sakura Kousuke isn't expecting much, having developed quite a resigned and pessimistic outlook on life during middle-school. As he's Late for School on his first day, though, he stumbles across Sakuranomiya "Nomiya" Sakura, who makes him race with her to make it on time. And when he's introduced to his new class, it turns out he's one of six students with a "sakura" in their names… which reawakens his childhood memories of the time spent with some of them, including Nomiya herself. After the teacher decides to put the six of them together for a group activity, they will all have to (re)discover their fellow "Sakuras"… and learn a bit more about themselves.

Serialized from September 2011 to June 2012 in Shonen Champion, Sakura Discord is Masuda Eiji's second series after How to Make an Invisible Man, and spans five volumes during which the focus is successively put on each of the main characters, who face their past and mistakes to finally look forward. While the comedy is more prominent than in Masuda's previous short series, the tone is more or less shared in half between light-hearted Slice of Life and melancholic drama. The series also sets a few of the recurring graphic and writing traits that would get more prominent in My Monster Secret.