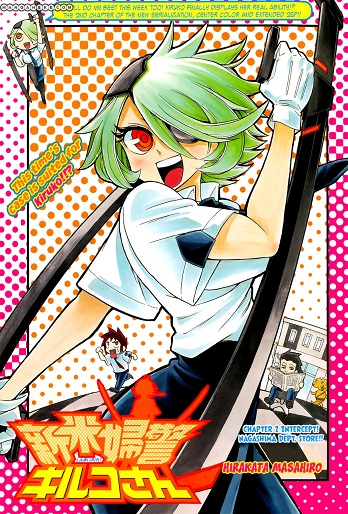 Yes, this police woman has green hair, orange eyes, an eyepatch and swords. What did you expect from Japan?
"Is she... a Woman!? She has some sort of eye patch! She's full of killing intent! And she has blades!! She has blades I've never seen before!! Just who is she? She's really scary—-!! And her tits are enormous--!! Hey, her tits don't matter right now."
— Haruki Anjō / Senpai

Rookie Policewoman Kiruko-san (Shinmai Fukei Kiruko-san in Japan) is a Shonen Jump manga centering on the career of the police officer Kiruko Otonashi. She is attractive, loyal, wears an eyepatch, wields two tonfa-blades capable of slicing cars in half– wait. what?

The story begins at the Nagashima Substation with the lazy, perverted parole officer Haruki Anjō, who continually gets his pay cut by his boss, Kanjūrō Tsutsui. When Tsutsui mentions a busty new policewoman arriving, Anjō asks to train her as an officer, not realising that Tsutsui tricked him into having an Ax-Crazy Cloudcuckoolander Genki Girl with superhuman speed and strength gained from her past life as a mercenary. However, being a mercenary is all Kiruko knows how to do, and so Anjō and Kiruko must fight against crime without having Kiruko accidentally destroy the city as well.