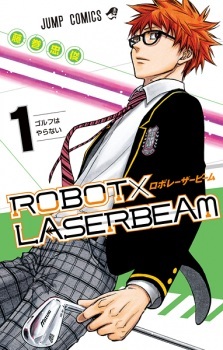 Tomoya: So you've gotta join it too! The golf club, that is!
Robo: No, I'm fine.
Tomoya: Why not!?
Robo: I mean, you're just hitting a ball with a stick and making it fall into a hole, right? What's fun about that?
Advertisement:

In modern day Japan, golf has become popular with young and old athletes alike, and the current generation of young golfers has ushered in an era of "Power Golf" where they dominate golf courses with their long, powerful drives.

Enter Robato "Robo" Hatohara, an aloof and stoic high schooler at Eiai Academy, and his best friend Tomoya Nakata, a member of Eiai's golf club who wants to recruit Robo. To Tomoya's dismay, Robo is completely indifferent towards golf, especially competitive golf. At first, he doesn't even know what a yard is, much less what the rules of the game are!

(Don't worry, this is a sports manga, so that doesn't last very long.)

One day at the driving range, he defends Tomoya in an impromptu accuracy competition, where he unveils a rare and hidden talent that threatens to shake up the competitive golf scene: a shot that's so accurate and straight that it resembles a laser beam! As allies and rivals alike catch on to Robo's unique shot and staggering potential, he soon discovers his love for the sport and the competitive streak he never thought he had.

Robot x Laserbeam (the x is unpronounced, much like Hunter × Hunter) is a sports manga that, on March 2017, started serialization in Weekly Shonen Jump. Its author is Tadatoshi Fujimaki, whose previous work was Kuroko's Basketball. The series ended abruptly in June 2018 with 7 volumes, due to falling volume sales.