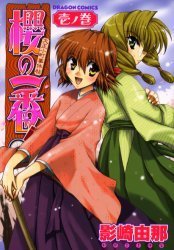 Asami Hinomori has recently gotten permission from her grandfather (due to her mother's insistence) to take a train to Tokyo to attend a boarding school called "Sakura Hill School for Girls". She's excited, of course, since she gets to see her elder brother, Ikurou, who's a detective. But Tokyo turns out to not be as safe as it seems with grisly murders and serial killers running rampant. Asami finds herself running into these mysteries, has the will to solve them, and is determined to find the culprits of these cases.

Sakura no Ichiban! (櫻の一番!, "Sakura's Best!") is a mystery shonen manga set in the Taisho era by Yuna Kagesaki, who's also known for later creating Karin and Hekikai No Aion. The manga was serialized in Dragon Age from 2001 to 2003, and compiled into five volumes.

This manga displays examples of the following tropes: