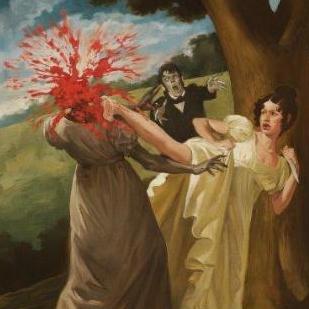 FATALITY.
"My blood! He-he punched out ALL MY BLOOD!"
— The Scout, Meet the Sandvich

Blood, as an indicator of injury and mortality, is something you don't want to see — unless the scene plays out in such a way that the gore becomes the joke, turning the gruesome display into hilarity.

May involve High-Pressure Blood, a shower of Ludicrous Gibs, or a serving of Chunky Salsa, but whatever the details the victim is certain to be Overdrawn at the Blood Bank.

See also Gorn, Bloody Murder, and Bloody Horror. Especially common in Black Comedy. Can overlap with Death as Comedy, and a key component to comedically-inclined Splatter Horror. Often the more mature cousin to Covered in Gunge. Contrast Amusing Injuries, when injuries that ought to have gruesome effects are played harmlessly for slapstick comedy.

Not to be confused with Did Not Do the Bloody Research, about "bloody" as a curse word.

As a Death Trope, many if not ALL Spoilers will be unmarked ahead. Beware.

"Oh man, look at what you've done to my bloody couch!"

Lucy's corpse spews a veritable fountain of blood when she is staked.

Lucy's corpse spews a veritable fountain of blood when she is staked.