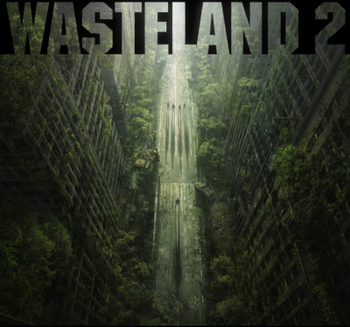 Your mind just exploded like a blood sausage.
"Now Rangers, I know it seems, at times, our cause is hopeless. And I know it's hard to say goodbye to a brother in arms. But I want you to know something else - that no Ranger that dies in the line of duty will ever be forgotten, nor will he ever have died in vain... or, unavenged."
— General Vargas
Advertisement:

Wasteland 2 is a sequel to the classic 1988 CRPG Wasteland, notable not only for bringing back a quarter of a century-old brand but also for being the first big name Western RPG crowd-funded

on Kickstarter. It was developed by inXile Entertainment, a studio made up of former Interplay employees who worked on the first game, with Obsidian Entertainment and Chris Avellone as co-developers. Originally expected for an October 2013 release, the crowdfunding exceeding initial goals caused it to be delayed more than once before its release on September 19, 2014 for Windows, Mac, and Linux.

Fifteen years have passed since a squad of Desert Rangers defeated the insane cyborg Finster and the Base Cochise AI, saving the world from a second apocalypse. After their long trek home, the Rangers realize that they now have a prime opportunity to upgrade their arsenal, and migrate from their former base at the Federal Prison to the Citadel, whose violent inhabitants had been eradicated. There, they began studying the base's secrets, hoping to use the knowledge they gained there to improve the quality of life out in the desert.

But all is not well in the Wasteland. While the Rangers were holed up in their safe new base, other groups began making power plays. Highpool's still bitter about that kid the Rangers killed, the old Prison base has been taken over by a gang of exploitative thugs known as the Red Skorpion Militia, the Rail Nomads have fallen back on their old grudges, a radiation storm has cut off contact with Quartz and Vegas, and you can't so much as rub your nose without running into the many gangs of raiders roaming the desert. And those are just the problems that don't spoil the story.

This last one's the kicker, though... Strange radio broadcasts are coming from the west, offering immortality and a future where man and machine are one, and, perhaps most worryingly, outright threatening to destroy the Desert Rangers and everything they stand for. It was enough to get ol' General Vargas spooked, and one of the old Cochise team, Ace, was sent to investigate. Ranger HQ lost contact with him days ago, and now he's finally come home... in a bodybag. Now it's up to the next generation of Rangers to find out who's responsible for his death, how it's linked to those broadcasts, and what's been stirring up trouble in the Arizona Wasteland - all while protecting the people of the wasteland and bolstering their ranks. No pressure, rookie...

At the 2015 Game Developers Conference, a Game of the Year Edition version was announced. Dubbed Wasteland 2: Director's Cut, the game was released on Xbox One, PlayStation 4, and PC on October 13, 2015. Anyone who owned the original computer version before the Director's Cut was released received it for free. The Director's Cut features updated graphics note due to the upgrade from Unity 4.5 Pro to Unity 5 which include overhauled art and lighting and updated character models, a "Quirks and Perks" system similar to the trait and perk systems from the Fallout series, a Precision Strike system (aimed shots, replacing/expanding upon the Headshot system in the original game), and new voice overs for all major characters.

A third game, Wasteland 3, was successfully funded in November 2016, and was released on August 28th, 2020. Its most commonly known change is an icy apocalypse, where you're more likely to be killed by hypothermia than dehydration - in the frozen wastelands of Colorado.