Film / The Sea Inside 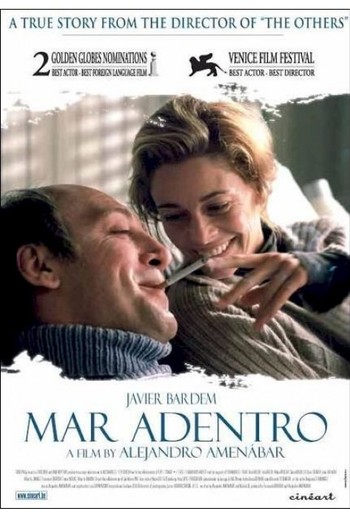 "Only time, and the evolution of consciences, will decide one day if my request was reasonable, or not."
— Ramón Sampedronote In the film as in real life.
Advertisement:

The Sea Inside (Mar Adentro) is a 2004 Spanish film directed by Alejandro Amenábar, and starring Javier Bardem.

The film opens with the arrival of Julia (Belén Rueda), a lawyer, at the seaside home of Ramón Sampedro (Bardem). Ramón is a quadriplegic, having broken his neck as a result of a diving accident nearly 28 years before. Ramón has no further interest in life and wants to die, but he is physically incapable of killing himself due to his injury; as there is no legislation providing for assisted suicide, anyone helping him risks being a target of murder prosecution. A legal battle ensues as Ramón seeks help to end his life on his own terms. Meanwhile, Julia has her own major health problems, which deepen her sympathy for Ramón's plight.

No covered spoilers below so read at your own risk.