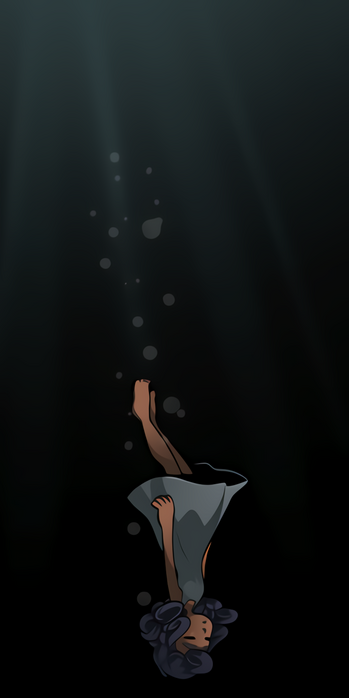 When I get to the bottom of it, I sink.
"Using different aesthetical and technical strategies, contemporary cinema shows immersed and drowning bodies to represent and express intimacy and protection, suspense and fear, obsession and depression, state of shock, past or infancy trauma, hallucinations and nightmares, etc."
— Adriano D'Aloia, "Film in Depth: Water and Immersivity in Contemporary Film Experience"

Symbolic Serene Submersion is a versatile visual metaphor where a person is passively submerged in an ocean, pool, or other body of water for symbolic reasons.

Something about their weightlessness, surrounded by calming cool blues and muffled sounds, suggests serenity—meditation, incipience, or a similar state of being. Water tends to be associated with emotion and the subconscious, and passive immersion can be a way to show a character settling down into their feelings and perhaps returning to a womb-like state. The stillness provides a pause for the audience as well, encouraging them to slow down and reflect on what the submerged character is experiencing.

However, the lack of struggle is just as often played as Dissonant Serenity, especially if the character is drowning or in danger of drowning: It can signify overwhelm, isolation, helplessness, listlessness, capitulation, or emotional suffocation. Particularly unsettling examples will frame already drowned bodies this way, in which case their stillness is more than conscious passivity.

While the most common variation is to show or describe the character floating completely motionless, some examples can include slight movement, provided the character is surrendering to, rather than struggling against, the water. The primary appeal of these shots in visual media is that they look really cool, especially if the character has clothes and/or hair billowing aesthetically around them. Has some inherent Fanservice potential, especially given that the character is often pictured in their sleep wear, for extra dreamlike quality of the scene, and occasionally nude.

Often a Stock Visual Metaphor. Can result from a Symbolic Baptism, Suicide by Sea, or invocation of the Rule of Pool. Compare Underwater Kiss & Power Floats, which make use of similar aesthetics, and Candlelit Bath & Dive Under the Explosion for similar moments of aquatic respite. May overlap with Blood Is Squicker in Water. Contrast Hollywood Drowning, where the submerged individual is anything but calm. See also Super Not-Drowning Skills.

Silco delivers a calm Opening Monologue as he peacefully drowns in a large body of water.

Silco delivers a calm Opening Monologue as he peacefully drowns in a large body of water.