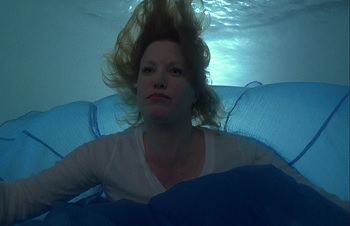 "Hey-O. Pool party!"
Walt: I can promise you that Gus Fring is dead, and he was the threat. He was the danger.
Skyler: I thought you were the danger.
Advertisement:

Walt takes his son with him to a mechanic to have his van fixed up. After retrieving and donning his pork pie hat, Walt decides to sell the van to the mechanic for pennies on the dollar. Junior wonders why, and finds out when Walt gets a new car to replace it: a pitch-black 2006 Chrysler 300. Junior is impressed, but implies that Walt can do better, so Walt one-ups himself by trading in Junior's SUV for a red-hot 2012 Dodge Challenger, father and son revving their engines in their driveway and having a grand time of it.

In Houston, Lydia, working at Madrigal's US office, receives a tip-off from Mike about the DEA coming to question her. Lydia manages to evade suspicion by selling out her patsy, Ron Forenall, with Mike promising to get her a replacement to help deliver his methylamine after the DEA leave.

Back at the White residence, Walt and Junior brag about their new cars (both of which Walt leased instead of buying outright to maintain his cover of having modest income) at the table as Skyler silently eats her dinner, still fearful of her husband. The following morning, she almost neglects the family tradition of breaking Walt's bacon to form the number of his age on his birthday, "51", but Junior and Walt pointedly remind her to do it.

At the DEA, Hank and Gomez go over diagrams of Gus' drug empire as they have hit a dead end: none of the men on Gus' payroll are saying anything, and "Blue Sky" is appearing on the streets once more. Hank is pulled aside for a moment by the standing Assistant Special Agent in Charge, who offers to promote Hank to ASAC in light of his having broken the case with Gus wide open, a promotion that Hank accepts.

Walt heads home early from a cook site with Jesse to celebrate his birthday. When he arrives home, he finds, to his disappointment, that Skyler did not arrange a surprise party and had brought home a pre-cooked dinner instead of cooking for him. Hank and Marie join them, and while Walt gives a speech about how he has coped with cancer and how Skyler was such a big support to him over the past year, Skyler slowly walks into the pool, as if to drown herself.

Walt rescues Skyler from her apparent suicide attempt and has a conversation with Hank and Marie about what to do next. Marie suggests she and Hank look after the kids to give Walt and Skyler space to work through their marriage, but admits that this was Skyler's idea when Walt questions her. After Hank and Marie go home, Walt chastises Skyler for being "shortsighted" with her plan. Skyler adamantly demands that the children not be at home with them while Walt conducts his illegal enterprise, in spite of Walt's assurances that they were the safest they had ever been now that he was in charge. Walt, stalking Skyler around the room as she backs away from him, demands Skyler explain just how she intends to keep his children away from him. Skyler suggests she have another self-injurious incident like at the pool, to which Walt counters that he would have her placed in a mental institute and raise the children by himself. Skyler states she will hurt herself and tell the police Walt abused her, but Walt shoots down that suggestion, stating that learning his father was a wife-beater would destroy Junior. Skyler claims she'll send Junior to boarding school, but Walt questions the logic in trying to convince Junior to uproot his entire school life so late in the school year and be separated from his friends.

Skyler finally breaks down and admits she doesn't know what to do, that she can't even do anything. "I can't go to the police!" she cries. "I can't stop laundering your money, I can't keep you out of this house, I can’t even keep you out of my bed! All I can do is wait. That's it, that's the only good option, hold on, bide my time, and wait."

"Wait for what? What are you waiting for" Walter asks.

"For the cancer to come back." Skyler answers.

Walt meets with Jesse and Mike. Jesse went to Madrigal's office in Houston some days earlier to pick up a barrel of methylamine from Lydia, only to find that a GPS tracker had been placed on it. He talked the matter over with Mike, who states that the bug planting was too sloppy to be the DEA. Most likely, Lydia put the tracker on the barrel herself, to make them suspect that the DEA was tracking them so they would not try to use her as their connection. Mike prepares to leave to kill Lydia once and for all, but Jesse stops him and insists the three take a vote. Walt plainly states that the flow of methylamine was not to stop: they were going to find a way to proceed as usual, to Mike's chagrin.

Before Walt returns home, Jesse tells Walt he liked his idea for dealing with Lydia and gives him a late birthday present: a new watch. Walt flaunts the watch to Skyler when he returns home, bragging of how Jesse wanted to kill him a few weeks ago, but how he managed to bring him back around, just like he believes he'll bring Skyler around.