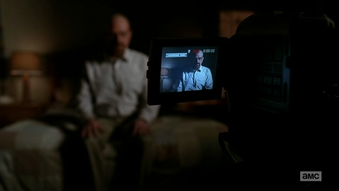 "My name is Walter Hartwell White. I live at 308 Negra Arroyo Lane, Albuquerque, New Mexico, 87104. This is my confession."
"All I could think to do was to make this video and hope that the world will finally see this man for what he really is."
— Walter White
Advertisement:

At a diner, Todd leaves Walt a voice message telling him about the "change in management" for his old operation, following Jack and the Neo-Nazis' replacement of Declan's crew as distribution. He brags to his uncle Jack and a fellow skinhead Kenny about the train heist he pulled off with Walt and Jesse, while conveniently leaving out what happened to Drew Sharp, before they make their way to New Mexico. Jack asks Todd if he's ready to cook quality meth, to which Todd assures him that he is.

Hank enters the interrogation room where Jesse is detained after trying to toss his $5 million, informing him that he knows of Heisenberg's true identity as Walter White, his brother-in-law. He tries to convince Jesse that if he confesses, they can bring down Walt together. Jesse is clearly conflicted and angry at Walt, but remains belligerent towards Hank and refuses to talk because of his ongoing grudge against him. Saul arrives to control the damage and ushers out Hank.

Back at the White residence, Walt is ordering Saul to use his money to bail out Jesse. When Junior comes home, he tells Walt that Aunt Marie had called him over to help with her computer. Realizing this was another ploy to separate him from his children, Walt tells Junior that his cancer has returned, playing on Junior's love and concern for his father to convince him to stay. Afterwards, Walt and Skyler work together to record an apparent confession.

Walt and Skyler meet with the Schraders at a Mexican restaurant to discuss their situation, and tempers flare. Walt tries to explain that he is no longer involved in the drug trade, and that there is nothing to gain from trying to prosecute him. He claims that putting Junior through the trauma of finding out about Hank's "allegations" would be too cruel after he's just "found out" that Walt's cancer is back. Hank, however, is determined to see Walt behind bars; he's not going to let Walt's cancer claim him before he can face justice.

With both parties at an impasse, Walt leaves a DVD containing his apparent confession with Hank. When Hank and Marie play it at home, however, they find that the "confession" is a ploy: Walt tearfully confesses that Hank had been using him as his cook to start a meth empire using his connections in the DEA. He claims that Hank kept him in line by threatening his family and taking his children from him for three months, that Hank had sold him into servitude to Gus, that Hank's shootout with the Cousins was actually a hit placed on him by Gus after a falling-out, and that Hank had forced Walt to pay his medical expenses while he recovered.

Hank and Marie are left gobsmacked at Walt's sheer audacity. Hank thinks the confession to be an empty threat, but Marie reveals that she had, indeed, taken money from Skyler, who had claimed it was gambling earnings, to pay for his hospital bills and rehabilitation. If the DVD was ever sent to the DEA, that money would give Walt's confession credence, and completely destroy Hank's own credibility.

Out in the desert, Walt meets with Jesse and Saul. Jesse tells Walt that he doesn't think Hank has gone to the DEA with his findings yet, and that he doesn't have any hard evidence. Walt, acting concerned about Jesse's spiraling mental state, suggests Jesse contact Saul's "vacuum salesman" and make a clean break, begin life anew somewhere. Jesse, however, tells him that he knows Walt is only worried about himself, and that he needs Jesse gone to stop Hank from continuing to go after him for evidence. He pleads with Walt to just ask him for a favor for once, and to admit that he doesn't give a shit about Jesse and will kill him if he doesn't do what Walt says, just like he killed Mike. Walt says nothing. Instead, he approaches a terrified Jesse and hugs him tightly.

Afterwards, Walt tells a weary Skyler at the car wash: "It worked". Hank has been rendered defenseless by the fake confession, and Jesse is no longer an issue...

...or so he thinks. Saul is preparing to have Jesse escape via the Disappearer, and scolds him for smoking weed because the guy won't take him if he has any drugs on him. He has Huell drop Jesse off on a roadside to meet with the Disappearer, but as Jesse waits, he searches for his weed and can only find his pack of cigarettes. He realizes that Saul must have instructed Huell to swipe the weed off of him, and that Jesse's initial instinct that Huell had stolen the ricin cigarette from him at Walt's request was entirely correct. Walt was the one who poisoned Brock, to trick Jesse into turning against Gus. Jesse turns and storms off, leaving the Disappearer's van to drive away.

Jesse runs into Saul's office, punching him in the face and threatening him with his own gun as he accuses him of helping Walt poison Brock. Saul admits he had Huell take his ricin, but claims that Walt never told him what he was going to do with it and only told Saul that he was "saving" Jesse. Jesse storms off with Saul's car and gun. As Saul warns Walt about the situation, who nervously retrieves his gun from the car wash's vending machine, Jesse breaks into Walt's house and starts to dump gasoline around the floor, intending to burn it to the ground...