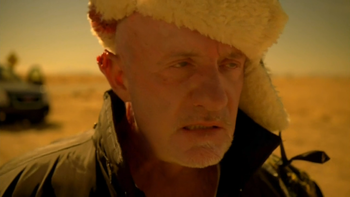 A little off the top.
As Mike deals with cartel goons trying to hijack a Los Pollos Hermanos truck (losing a piece of his right ear in the process), Walt and Skyler concoct a story to explain Walt's newfound wealth and their purchase of Bogdan's car wash: he earned money through gambling, but had become addicted and had to stop. After deciding that Walt will avoid demonstrating his supposed card-counting method by claiming to be in recovery, Skyler goes over a carefully prepared script for when they break the news to the rest of the family. Walt is less than enthused with the script Skyler concocted, thinking that it makes him appear weak and "out of control", but agrees to go along with it when Skyler reminds him that he would still come out of this ordeal ahead of her, being successful at gambling while she was being vilified as the "bitch mother" who gave Walt a hard time.
Advertisement:

That night, Walt and his family visit the Schraders. There, Hank shows Walt and Junior a video that he received while investigating a meth superlab: it was a video of Gale Boetticher, singing "Major Tom". Hank pokes fun at the nerd on the video, finding it hard to believe that such an unassuming man could possibly be Heisenberg. Walt, however, is afraid that Hank might be able to tie Jesse to Gale's murder, and is hit with a pang of guilt as he's confronted with Gale's humanity and feels regret at having had him killed...

Afterwards, Walt and Skyler break the news of Walt's "gambling addiction" to the family. Walt excuses himself to avoid probing questions, but also to take a look in Hank's room for information regarding Gale's murder. As he leaves, he nearly runs into Hank, and to evade more probing questions, offers Hank whatever counsel he could about Gale's death. Hank reveals that some of Gale's notes make reference to "W.W.", someone who Gale seems to admire, but he doesn't know what it could refer to.

"You got me." Walt sarcastically answers, hands raised in mock resignation. He then suggests that "W.W." simply referred to Walt Whitman, an author that Gale was fond of and writes about elsewhere in the notebook.

Walt makes his way to Jesse's house and is taken aback by the state of disrepair it has fallen into as a result of Jesse's ongoing drug parties. He finds Jesse, who had his head shaved. Walt tries to ask Jesse details about Gale's murder to make sure he didn't leave any evidence behind, but Jesse is upset by the memory and struggles to talk about it. When Walt presses him, Jesse pays a couple of junkies at his party a hundred dollars to kick him out of his house.

The following day, Walt vents to Saul about Jesse's self-destruction, Gus wanting to kill him, and Skyler buying a car wash as though he could simply walk away from Gus once his contract with Gus ends. Saul proposes having Walt get into contact with someone he knows of: a "disappearer" who can help Walt vanish off the face of the earth and give him a new identity. Walt dismisses the idea, leaving him at an impasse.

As Walt grows more worried still when noticing Gus's surveillance cameras watching Jesse, Jesse returns home after work to find that his money had been stolen: one of the tweakers camping out in his house saw him go into his room, come back with a wad of cash, and connected the dots. Jesse, however, has fallen into such a state of self-loathing and despair that he can hardly muster the energy to care. Instead, he continues to prevent himself from having to confront his demons by bringing a girl up to his room to play Sonic & Sega All-Stars Racing.

The following morning, Jesse is awaken by Mike, who had chased off all of the tweakers squatting in his house, retrieved his money, and bound the tweaker that had stolen his cash as if to have him executed. Jesse takes back the cash, but doesn't really care about what happens to the thief (noting that Mike wouldn't have blindfolded him if he intended to kill him), nor does he really care about anything else; and returns to his room. Mike meets with Gus afterwards, relaying to him Jesse's behavior that is making him a liability, and that something has to be done about him, whether Walt likes it or not.

The following day, Walt is left to operate the lab by himself, as Jesse is missing. When he goes to Jesse's house after work, however, he finds that Jesse is missing: the reason he hasn't been answering his calls is because he left his cell at home, and there is no telling where he is! Walt returns to the lab, glares into one of the cameras, and growls to Gus: "Where is he?!"

Jesse is riding in a car with Mike. Mike asks if Jesse knows what's going to happen, but Jesse says "No", completely detached and emotionally numb...