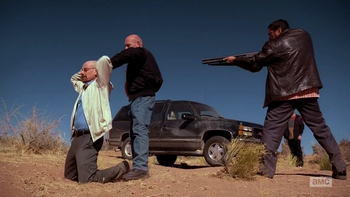 If you look up "Hope Spot" in the dictionary, this image is there.
Advertisement:

Walter makes a deal for another hit with Todd's Uncle Jack. Jack demands that Walt cook for them in exchange, claiming any money Walt can pay is a "drop in the barrel" compared to what they stand to make dealing his blue sky, which Todd has proven unable to replicate. Walt concedes, promising to do just one cook as a tutorial after the deed is done. Todd shows signs of romantic interest in Lydia, who remains cold. Jesse tells Hank and Gomez about his plan: Hank has no evidence on Walt, but the one piece of evidence Walt would never destroy is his money, and Jesse thinks Huell knows where it is. Hank devises a strategy to get Huell to flip, fabricating a fake photo of Jesse with his brains splattered on the floor, and claiming evidence of phone calls from Walt to Saul talking about killing Huell and Kuby. Upon seeing the photo, Huell tells Hank about renting the van they used to transport the money and says it was dirty when it got back. Hank deduces Walt buried the money, but can't tell where as the van had no GPS.

Meanwhile, Walt visits Andrea and expresses concern over Jesse's disappearance, and lays a trap with the White Power Gang, having Andrea leave Jesse a message that Walt came by. Hank realizes that Walt doesn't know the van had no tracking system, and fabricates another photo of a money barrel open in the ground. Jesse sends this to Walt, who is at the carwash after Saul tells him Huell is missing. Upon receiving the photo and Jesse's subsequent phone call, Walt speeds off to rescue his cash, remaining on the phone with Jesse. Jesse taunts him with accusations of his crimes and threats to burn all the money. Walt angrily counters with all the things he's done to defend Jesse's life.

Finally arriving at To'hajiilee, Walt discovers he has been tricked. Seeing dust rising in the distance, he panics and calls Jack for backup, thinking Jesse means to kill him. Upon seeing the car pull up with Hank, Gomez, and Jesse in it, Walt realizes what's really happened and tells Jack to call it off, not to come. As Hank calls for Walt to come out of hiding, Walt silently cries behind a rock. Finally, he stands up and drops his gun, allowing Hank and Gomez to cuff him and read him his rights, but calls Jesse a coward for becoming a rat. Jesse spits in his face, and they briefly fight before being put in separate cars. Hank makes a triumphant call to Marie to announce he has arrested Walt, and Marie is overjoyed. As Hank hangs up, Walt notices two vehicles approaching in the mirror and realizes Jack and his gang have come despite his calling them off. Walt screams for Hank's attention but is unheard. The Neo-Nazis, armed to the teeth, level their guns and demand to see police ID from Hank and Gomez, who aren't fooled. They take cover behind the SUV, the Nazis fire the first shot, and a huge gunfight begins.