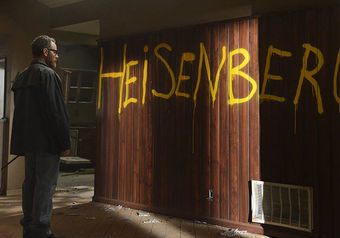 Geez, this place is a wreck.
"It was you. All along, it was you! You son of a bitch. You drove me into traffic to keep me from that laundry. That call I got telling me Marie was in the hospital? That wasn't Pinkman. You had my cell number. You killed ten witnesses to save your sorry ass. You bombed a nursing home. Heisenberg. Heisenberg! You lying, two-faced sack of shit!"
— Hank Schrader
Advertisement:

The first episode of the second half of the final season, aka Season 5B (During its original broadcast, there was an 11-month gap between 5A and 5B.)

An older, disheveled Walter White returns to his old home, 308 Negra Arroyo Lane. In the time since he was last here, the house has fallen into disrepair. The empty swimming pool is used by skateboarders as a miniature skate park, sneaking their way past the fences that had been built up around the house. Inside, the house is completely bare, all except for graffiti adorning the walls, including the name "Heisenberg" in large yellow letters. Walt has a reason to be here after all this time, however: to retrieve his vial of ricin.

As he leaves, he catches the frightened gaze of his former neighbor, Carol. He greets her as she, shocked at Walt's return, drops her groceries...

In the present, Hank slowly emerges from the Whites' bathroom, having just made the discovery of a lifetime thanks to a certain Gale Boetticher. He pockets the book, returns to the rest of the family out back, and quickly makes an excuse to leave. On the way home with Marie, he suffers a panic attack and crashes his car into a neighbor's fence. The next day, he compares Gale's handwriting in Walt's book to that in Gale's notebook, confirming that they are identical. For the rest of the episode, Hank digs through boxes and boxes of files from the Gus Fring case, looking for evidence.

Meanwhile, Walt is working at the car wash with Skyler. Lydia stops by and tells Walt that ever since he left the business, their meth purity has dropped drastically, and she asks for his help. He refuses. As she's leaving, Skyler warns Lydia never to return.

Jesse, trying to hang out with his friends, is depressed and dazed. He brings Saul the $5 million that Walt had given him in the previous episode, and asks him to give half to Drew Sharp's parents, and the other to Mike's granddaughter Kaylee. Saul tries to explain how unwise this would be: the DEA would quickly snatch up any money sent to Kaylee, and Drew's parents would rather know what became of their son than receive money. Jesse isn't having it, so Saul tells Walt, who is in a chemotherapy session, about the situation. He brings Jesse's money back to him and insists that he should keep it. Jesse remains distant and unreceptive to Walt's attempts to connect with him, and he as much as reveals that he knows Walt killed Mike. When Walt insists that he didn't, telling Jesse that he NEEDS to believe him, a distraught Jesse pretends to agree.

Walt discovers that his "Leaves of Grass" book is missing. Skyler mentions that Hank has been home sick all week long, ever since their party. Walt then discovers a GPS tracker on his car. Putting two and two together, he realizes that Hank is finally onto him.

Jesse is sleeping in his car when a man asks him for spare change. In a moment of realization, he gives the man a stack of cash from his $5 million and then drives through neighborhoods around Albuquerque, tossing stacks from his car onto people's yards.

Walt visits Hank at home the next day to ask how he's doing. However, as he's leaving, he decides to question Hank about the GPS tracker. Hank then becomes enraged, punching him in the face, and recounting a handful of the horrible things that he now knows Walt was behind. Walt admits nothing, but declares that even if Hank is right, Walt will be dead long before he ever had a chance to be convicted; his cancer has returned, and this time is inoperable. He claims that Hank's "wild accusations" will destroy their family. The episode ends with Walt growling at Hank that if he really wants to go after him, he should "tread lightly."

"If that's true. If you don't know who I am, then...maybe your best course would be to tread lightly."