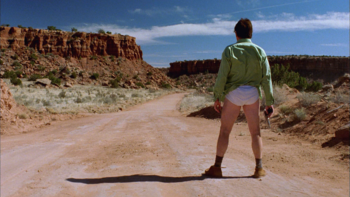 Why is a 50-year-old man standing in the desert in his underwear with a handgun? That's a long story...
"The DEA took all your money, your lab. You got nothing. Square one. But you know the business. And I know the chemistry. I'm thinking...maybe you and I could partner up."
— Walter White
The first scene we see is several landscape shots of desert in Albuquerque, New Mexico. Suddenly, a pair of khakis falls from the sky and is quickly run over by a speeding RV, driven by the owner of the khakis, Walter Hartwell White. He's driving the RV in his white underpants and wearing a gas mask. A young man in the passenger seat has a gas mask as well, but appears to be unconscious. In the back, broken glass, liquids, and two more un-moving bodies are careening around. Walter's mask becomes foggy, and he drives off the road and crashes. He emerges, flinging the gas mask from him in frustration, before donning his shirt and re-entering the RV to retrieve a videocamera and a handgun. He records a tearful message saying goodbye to his family and then stands on the road pointing the pistol toward the sound of oncoming sirens. Cue title sequence!
Advertisement:

After the credits, we flash back to three weeks earlier. Walter is exercising and staring at a plaque commemorating his contributions to Nobel Prize-winning research. At breakfast, his wife Skyler makes him a plate of eggs with veggie bacon spelling out "50". It is Walter's 50th birthday today. His son, Walter Jr., who has cerebral palsy, mocks the veggie bacon and his mother's healthy food crusade. Walter and his son then drive to JP Wynne High School, where Walt Jr. is a student and Walt Sr. is a chemistry teacher. Walter is also shown working as a car wash cashier, his second job to make ends meet. One of his students happens to spot him wiping down car tires and takes a picture. Humiliated, Walter returns home late to find a surprise birthday party for him, with many guests. His brother-in-law, Hank Schrader, a DEA agent married to Skyler's sister Marie, is holding a casual demonstration of his pistol and passes around to Walt, then takes his drink from him as the party toasts, leaving Walt holding the firearm instead. Hank is also featured on the news busting a local meth lab. Walt is astounded at how much money the criminals have made.

Next day at the car wash, Walt suffers a coughing fit and collapses outside by the cars, and is rushed to the hospital by ambulance, against Walt's protests. After a scan, a doctor tells him he's been diagnosed with terminal lung cancer. Walt seems to take the news well, hides it from Skyler, but explodes at his car wash supervisor, Bogdan, and angrily quits. Sitting alone by his poolside at dawn lighting matches, he calls Hank to take him up on the offer to ride along with him for a drug bust. The DEA busts Emilio Koyama's meth lab, while Walter sits in the car and witnesses Emilio's partner, Jesse Pinkman, escaping from the house next door while a naked woman throws his clothes out of the window. Walt recognizes Jesse as a former high school student of his. Later that evening, Walt stops by Jesse's house to make him an offer: they go into business making meth together, Jesse handling the business and Walter handing the chemistry. He subsequently threatens to turn Jesse in if he doesn't agree.

Their partnership settled, Walt steals a box full of chemistry equipment from his own classroom at the high school, while Jesse purchases a RV for them to use as a lab. They drive into the desert and cook, with Walt in his underwear to keep the smell out of his clothes. Jesse declares Walter "an artist", and is clearly impressed with his technical abilities. Jesse takes a sample to his distributor Krazy-8, cousin of Emilio. Emilio unexpectedly shows up, out of jail on bail, and falsely accuses Jesse of ratting him out to the cops. The two threaten Jesse and ask where he got his sample. The three drive out to the RV where Walt is still cooking, but when Emilio recognizes Walter from the bust, the two assume he's working with the DEA and pull their guns on Jesse and Walt. Jesse tries to run away, but falls on a rock and is knocked out as Emilio and Krazy-8 threatens to kill them both. Walter, picking on Krazy-8's admiration of his meth, talks them into sparing him and Jesse if he teaches them his recipe. He begins cooking, but deliberately mixes the wrong chemicals to cause an explosive cloud of gas and runs out of the RV, holding the door shut as the two inside are poisoned. Walter suddenly notices that the desert grass has caught fire from Emilio's stray cigarette butt, and frantically puts gas masks on himself and Jesse before driving off in the poisoned RV.

Now we're back at the opening teaser, and Walter is staring down the road menacingly. He suddenly decides not to commit Suicide by Cop and puts the gun to his head and pulls the trigger, only to discover the safety is on. His efforts to unlock it only result in a misfire into the ground. The siren vehicles emerge and are revealed to be fire trucks, not police cars as Walt had feared, and are merely rushing past to get to the brushfire they left behind. Jesse emerges from the RV, sporting a black eye, as Walter vomits in the middle of the road. We then see Walt drying all of the cash from the botched drug deal in the family dryer, and getting into bed with Skyler, who is concerned about where he's been. In response, Walt starts seducing her, turns her around for some very intense Glad-to-Be-Alive Sex. Skyler is clearly shocked, asking "Is that you?" as the credits roll.