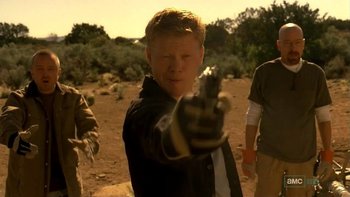 "NO!!!" note  This is right before Todd shoots a child witness dead.
Advertisement:

We open on a young teenage boy riding his dirtbike over rural desert in New Mexico. He comes across a tarantuala and allows it to harmlessly crawl over his hands, then places it in a glass jar and puts in in his pocket. Way off in the distance, we hear a freight train, which draws the boy to ride over to it. Cue the title card.

Walt pays a visit to Hank's new office and, once they're alone, begins tearfully venting about his and Skyler's broken marriage. When Hank, extremely uncomfortable, leaves the office for a moment to get Walt a cup of coffee, Walt uses the opportunity to plant a bug on his desk.

Afterwards, Walt, Jesse, and Mike pay a visit to Houston, where they abduct Lydia and take her to an abandoned building. Mike explains that he is giving Lydia a chance to redeem herself on behalf of his associates; he asks her to quickly memorize a script while he calls the Albuquerque DEA to figure out whether they had really placed tracking devices on Lydia's methylamine inventory, or whether Lydia had planted them herself to scare Mike off of her supply. If he didn't like what he heard, or she deviated from the script or started crying, he would pull out his pistol and shoot her in the head.

Lydia, reading off the script, asks Hank about the tracking devices, but Hank claims to know nothing about them. While he puts Lydia on hold to double check with the Houston DEA office, Mike reiterates that they would be better off killing Lydia and sparing themselves any further trouble. Jesse tries to convince Mike otherwise, but unfortunately, Walt agrees; the vote is two to one to kill Lydia.

As Lydia desperately begs for her life, the bug in Hank's office confirms her innocence; someone in the DEA had, indeed, put trackers on Lydia's supply, albeit without Hank's knowledge. Worse still, all of the barrels in her inventory have been tagged, which means they'll need to find a new connection. As far as Mike is concerned, this means Lydia still needs to die. Lydia, however, suggests an idea that might just work and save her own life in the process; stealing methylamine directly from a train tanker, a veritable "ocean" of methylamine. Her work lets her know what train will be transporting methylamine, which car it is in, what time it is expected to arrive at its destination, and the path it takes. As the train passes through New Mexico, it will enter a radio dead zone wherein no red flags would be raised if it came to a sudden stop. In exchange for this information, Lydia asks Walt for his word that she won't be killed, in addition to a cut of the profits.

As Walt's family life continues to fall apart—he agrees to let the children remain at the Schraders' for safety in exchange for Skyler's cooperation in his double life—Walt, Jesse, and Mike discuss Lydia's proposal. Mike is certain any such plan will fail and end in their arrest or death if they aren't willing to kill the train conductor and engineer to avoid leaving witnesses. He suggests scaling back their operation to a pseudoephedrine cook. Walt is unwilling to scale back, and bitterly reminds Mike of the "hazard pay" they already have to dish out to Mike's nine guys in prison to keep them from talking. As Walt and Mike argue, Jesse has an epiphany: "What if we can rip off that train...and no one ever knows it got robbed?"

Walt, Jesse, and Mike put their new plan into motion. As two members of the Vamanos Pest exterminator crew dig a pit next to the train tracks to place a tanker for storing their soon-to-be stolen methylamine, Walt and Jesse explain to Todd Alquist, another exterminator who will be helping them with the heist, that the plan is to syphon methylamine out of the tanker car while replacing it with water to keep the weight consistent. Even though this will make the methylamine remaining in the tanker slightly diluted, no one would suspect a theft; Madrigal would simply blame their Chinese manufacturer for sending weaker methylamine. Jesse then tells Todd that, because they'll be committing a major felony, no one can ever know about the heist.

On the day of the heist, Patrick Kuby, one of Saul's employees, blocks the train's path with a "broken-down" truck. As Mike serves as lookout while the conductor and engineer try to get the truck running again, Jesse runs under the tanker to syphon the methylamine while Todd pumps water in from the top and Walt monitors their progress at the tanks. But the plan is derailed by a Good Samaritan who offers to push Kuby's truck out of the way, which Kuby can't decline without drawing suspicion. Mike tells Walt to abandon ship with the hundreds of gallons of methylamine they've already gotten, but Walt insists on keeping Jesse and Todd on the train until they get exactly 1000 gallons. They cut it so close that Todd has to jump off the moving train, which runs over Jesse while he stays flat against the tracks, but the heist is ultimately a success and the train crew is none the wiser.

As they celebrate their victory, however, they notice that they had been witnessed by a young boy, watching them from atop his dirt bike, last seen in this episode's Cold Open.

The boy waves at Walt, Jesse, and Todd.

Todd casually waves back. Without any change in his expression, he then draws his gun. Jesse, realizing what Todd is about to do, quickly yells out a panicked protest, but undeterred by this, Todd shoots the boy and kills him on the spot.