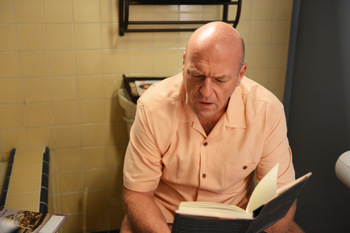 "Who do you figure that is, y'know?"
"Back in college, I'd spend my days marking trees in the woods with those orange spray cans. ... I've been thinking about that job more and more lately. Maybe I should've enjoyed it more. Tagging trees is a lot better than chasing monsters."
— Hank Schrader
Advertisement:

Walt sits alone in the exterminators' office, deep in thought, until Todd returns to inform him that Mike's car has been disposed of. The two then open the trunk of Walter's car, which contains Mike's body, and prepare to dispose of it. They close the trunk when the garage door opens and Jesse enters, asking if Mike got out of town okay. Walt simply tells Jesse that he is gone. Jesse suggests discussing how to deal with Mike's "legacy": the nine guys in prison he was paying off to keep from talking to the cops, and whose hush money has been RICO'd once again. Walt, however, states that because Jesse and Mike are no longer in the business, there is only one vote left: Walt's.

As Mike's guys begin to trip over themselves asking for deals with the DEA, Walt approaches Lydia to get their names. Lydia is reluctant at first, because she claims that Walt would simply kill her once getting what he needs since she would just be one more loose end. To ensure her continued usefulness, she makes him an offer: she can sell his "Blue Sky" meth in the Czech Republic, using her associates at Madrigal, and in exchange for a 30% commission, she would double Walt's profits. Walt accepts the offer, so Lydia gives him the list of names and proclaims, "We're gonna make a lot of money together."

Unbeknownst to Lydia, Walt indeed had planned to dispose of her after obtaining the names; he had brought his vial of ricin and changed his mind after hearing her proposition.

With the list of names, Walt meets with Todd's uncle: Jack Welker, the leader of a prison gang of neo-Nazis (most likely the Aryan Brotherhood), to discuss the logistics of killing Mike's lawyer and nine guys. The following day, Jack uses his prison connections to arrange their murders. Within the span of two minutes, Jack's gang members kill their targets: shanking them, strangling them, beating them to death, and in one case, burning them alive, all so those associates would not have a chance to ask for protective custody or spill the beans if they found out the others had been silenced. Hank starts looking into the murders shortly after. When he and Walt meet while Walt is visiting Holly at his house, the two sit down together and a defeated Hank tells Walt about a summer job he had in college tagging trees for lumbering crews to cut down. He didn't particularly enjoy it, but thinking back on it, he admits that he misses that simple work while he's "chasing monsters". Walt responds, "I used to love to go camping."

Over the course of the next three months, Walt ramps up his meth production, running labs in several tented houses as Skyler continues to launder his money, Declan and Lydia distribute the product throughout the American southwest and Europe, and Saul ensures their operation is unimpeded by the DEA. After Marie suggests to Skyler that it might be time to start repairing the family and send Holly and Junior home, Skyler takes Walt to a storage unit she's rented out. Walt is making so much money that she can't even store it all in their house, let alone launder it. She doesn't even know how much he's made, as it's impossible to count. She asks him a burning question: how much larger does the pile of money need to be before it's enough, and her family can be made whole again?

After having a routine MRI for his cancer, Walt pays Jesse a visit. Jesse is distant and on edge, and tells Walt that he heard what he did to Mike's guys and is still not coming back to the business. Instead of pressing him, Walt just begins to wax nostalgic about the "Crystal Ship", the RV they used as a mobile meth lab when they first started working together, and he and Jesse share a few memories of it's many dysfunctions. Before Walt leaves, he tells Jesse he left him something. Jesse finds two duffel bags on his front porch and apprehensively opens them to reveal his buyout money: five million dollars. He collapses to the ground and flings the gun he'd been holding to protect himself from Walt across the floor.

Afterwards, Junior and Holly return home as Walt, Skyler, Hank, and Marie enjoy a happy family get-together at the White residence. Hank leaves to use the restroom and finds a book to read: Walt Whitman's Leaves of Grass. Inside the cover of the book, however, he finds a message written inside: "To my other favorite W.W. It's an honor working with you. Fondly, G.B."

Realization begins to dawn on Hank: he thinks back to his discussion of Gale Boetticher's murder with Walt, and how he found mentions of a "W.W." in his notes.

"Who do you figure that is, y'know?" Hank asked Walt. "Woodrow Wilson? Willy Wonka? ...Walter White?"

"You got me." Walt said sarcastically, his hands raised in resignation.

Slowly, but surely, Hank comes to a frightening realization: