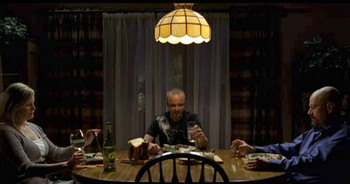 "These are very green beans, Mrs. White."
"This business is all I have left now. It's all I have... and you want to take it away from me."
— Walter White
Advertisement:

After the train heist, Walt, Mike, and Todd work in dreary silence as they disassemble the motorbike of the 14-year-old witness Todd shot, stacking its pieces into a barrel to melt with hydrofluoric acid. Another barrel is prepared for the boy. Outside, Todd joins Jesse as he smokes and tries to make small talk. When Jesse doesn't respond, Todd shrugs the boy's murder off as a case of "shit happens." Jesse punches him in the face.

Afterwards, Todd, sporting a black eye, tries arguing his case to Walt, Mike, and Jesse, who are all looking thoroughly demoralized. He claims that he did what he had to to ensure their operation would not be compromised, and that he would do it again if given the chance. But Jesse is just further angered by Todd's justifications and nonchalance. Afterwards, Todd is sent out of the office as a discussion is held to determine Todd's fate. As he leaves, Todd reiterates that he's extremely dedicated to the business and mentions that his uncle has connections in prison.

Jesse is immediately all for getting rid of Todd as quickly as possible, referring to him as an utter "wack job" and a loose cannon. Somewhat reluctantly, Walt outlines the pragmatic argument: the kid had seen them, and even if he didn't understand what he was seeing, he could still have told somebody. Jesse is not buying it, and claims that they would have "figured it out" if Todd hadn't made a decision for them. Walt proposes three options: fire Todd and pay him off to keep silent, dispose of him, or let him keep working for them under their control. Jesse votes to fire him, but Mike and Walt both vote to keep him on their payroll. Mike informs Todd that he's still in, but furiously warns him to never again bring a gun to another job without Mike's permission.

Afterwards, at a park, Mike is watching over his granddaughter while Gomez and his partner surveil him. He writes something on a piece of paper and leaves it under a trash can before leaving with his granddaughter, prompting Gomez to examine the "dead drop". It is a simple two-word message: "Fuck you". After talking with Gomez afterwards, Hank realizes tailing someone as experienced as Mike is essentially useless, at least not until they actually have evidence of his involvement with Gus' drug empire.

Skyler visits Holly at the Schraders' and breaks down crying in front of Marie. Marie coaxes her into telling her what's wrong, and she tells Marie that the kids aren't safe from her and Walt. Marie reveals that Walt told her about Skyler's affair, and sympathetically tells her that she has to forgive herself.

Walt and Jesse continue to cook in houses tented off by Vamanos Pest. While they're taking a break and watching TV, a news bulletin is aired about the ongoing search for Drew Sharp, a 14-year-old boy who went missing after being last seen riding his dirt bike into the desert. Jesse is clearly struggling with guilt, so Walt tells him that he's upset too and can't sleep at night. He tells Jesse that nothing like this will happen ever again now that they're in control, and lets Jesse leave early. As Jesse is packing up, he hears Walt whistling contentedly to himself as he finishes up the cook, leaving him unsettled.

After preparing the batch, Walt returns to the Vamanos Pest office, where Jesse and Mike are waiting. Mike informs Walt that the DEA is investigating him, leaving Walt incensed at Mike's supposed carelessness. Mike reassures Walt that the DEA has nothing on him, but nonetheless, he would have to retire from maintaining their distribution network for his own sake. Walt is surprised, but accepts Mike's resignation until Jesse tells Walt that he's out, too. Both Jesse and Mike are going to take their share of the methylamine from the train heist and sell it to Mike's contact in Phoenix, AZ, for $5 million each. Mike will pay his guys' legacy costs out of his share so Walt would not have to worry about them ever again. Jesse asks Walt to join them in selling his share of the methylamine, but Walt is furious and absolutely refuses: he explains that, once made into crystal meth, the methylamine would be worth over $300 million. Jesse is selling out for "pennies on the dollar." Jesse tells Walt that $5 million isn't pennies, and asks him if he's in the meth business or the money business.

The next day, Mike and Jesse meet with Mike's contact, Declan. Declan refuses to do business with them, however, unless they give him all of the methylamine so he knows that the blue meth is stamped out of circulation in the American Southwest, leaving him without any competition.

Jesse visits Walt's house that evening, and once again implores him to sell off his methylamine. Walt refuses still. He tells Jesse about Gray Matter, the research company he helped found and which he, himself, named. Before the company got off the ground, he sold his share of the company after a conflict with his partners, an even fifty percent, for $5000. The company is now worth over $2 billion, and Walt remains incensed over having sold his "children's birthright" for pennies on the dollar. He brings up Jesse's earlier question and answers that he is in neither the meth business nor the money business; he is in the empire business. Jesse rolls his eyes.

Skyler returns home and Jesse jumps up to leave. Walt, however, is pleased with this turn of events and insists Jesse stay for dinner, much to Jesse and Skyler's discomfort. Walt and Skyler eat their dinner in silence while Jesse desperately tries to make polite small talk, until Skyler brings up the fact that Walt told Marie about her affair and then disappears into her room with the wine bottle. Walt tells Jesse that his children aren't allowed in the house and Skyler is waiting for him to die: his meth empire is all he has left in the world, and Jesse is trying to take that away from him.

Walt rushes to the the exterminator office to take his methylamine, but Mike is waiting for him. Mike detains Walt overnight to keep him from taking his share before Mike's deal with Declan goes down, then ties him to a radiator when Mike needs to leave to attend to other business. Walt uses a stripped wire to melt apart his ziptie, burning his wrist in the process, and escapes.

Mike pays a visit to the DEA office with Saul, who informs Hank and Gomez that there is a restraining order against them due to their "harassment" of Mike: they can't approach him. This would buy Mike about twenty-four hours while Hank and Gomez get the order overturned, enough time for Mike to sell off the methylamine. He soon discovers, however, that the methylamine is gone. He returns to the office and finds a smug Walt with Jesse. He pulls out his gun and prepares to kill Walt, but Jesse stops him and urges him to listen to Walt's plan. As Walt describes it, "Everybody wins..."