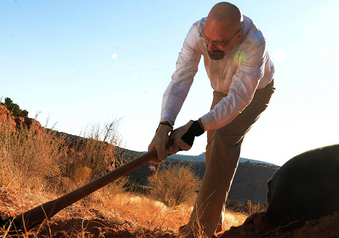 Walt goes back to where he began to hide his success.
"The way Hank talks, he's got his suspicions. Not much else. You can't give yourself up without giving up the money. That's the way this works, Walt. So maybe our best move here is to stay quiet."
— Skyler White
Advertisement:

In the still-dark early morning, an elderly man prepares to leave his house, but upon starting his truck, pauses and gets out to find a bundle of cash laying in his driveway. He then notices a small trail of money leading to Jesse's car crashed in a playground, which contains Jesse's bag of $5 million. Nearby, Jesse himself is seen lying down on a merry-go-round, completely unresponsive to his surroundings.

After having been forced to face the reality that Hank knows he is Heisenberg, Walt rushes back to his car and calls the car wash, asking for Skyler. She cannot be reached, because she is already on the phone with with somebody else. Looking out his window at Hank, Walt realizes just who she is talking to...

Skyler meets with Hank at a diner. Hank wants Skyler to tell him everything she knows about Walt's criminal enterprise, assuming that she was an innocent victim who only recently found out about Walt's double life, but Skyler is very uncomfortable with Hank's aggressive desire to arrest Walt and asks if she should contact a lawyer. Hank tries to assure her that he's only interested in her safety, as well as her family's—he tells her to bring Jr and Holly back to his house. Skyler won't help him, however, and tries to leave. When he continues to try to ask her questions, she demands that Hank tell her if she's under arrest before leaving in tears.

As Kuby and Huell are sent to collect Walt's stack of money from storage, Walt vents to Saul about how Skyler could think to go to Hank before him. The two decide to go over their options, with Saul suggesting that Walt "send [Hank] on a trip to Belize"—where Mike had gone. Walt angrily shoots down the idea; he refuses to have family killed, and threatens to send Saul to "Belize" for the suggestion.

Huell and Kuby return to Saul's office, reporting that they had taken all of Walt's money and loaded it in seven barrels in a rental van. After compensating the two, Walt sets off for the desert of To'hajiilee. Throughout the day and into the night, Walt single-handedly digs a pit to bury his money for safekeeping. Afterwards, he takes note of the money's coordinates: +34° 59'20", -106° 36'52". After committing the coordinates to memory, he has a lottery ticket printed out with the same numbers as the coordinates and pins it to his fridge.

Marie visits Skyler and tries to talk to her about Walt. She asks Skyler how long she had known about Walt's criminal activities, to which Skyler can do naught but cry and apologize. Realizing Skyler knew what Walt was doing even before Hank was shot by the Cousins, Marie smacks her across the face, accuses her of not cooperating with Hank because she thinks Walt can get away with it, and storms out of the room. She tries to take Holly with her, but Skyler stops her. Hank enters the house as the two sisters scream at each other as Holly cries in Marie's arms. Hank instructs Marie to give Holly back to Skyler before they leave. Appalled that her sister is a willing accomplice to a meth kingpin, Marie quietly tells Hank: "You have to get him."

Walt returns home early in the morning, covered in sweat and dirt. Skyler follows him into the bathroom as an exhausted Walt prepares to take a shower. Skyler explains that she said nothing to Hank and pleads with Walt to talk to her, only for Walt to collapse and lose consciousness. Skyler tends to Walt until he comes to. He tells her that he will turn himself in on the condition that she not return the money he made, so that everything he had done for the family would mean something. Skyler, however, tells Walt that he can't turn himself in without giving up the money. She says that Hank doesn't know anything for certain, so the best thing they can do is keep silent.

Meanwhile, out in Arizona, Lydia meets with Declan and his crew; after taking over Heisenberg's operation, the quality of the blue meth had declined sharply. She is displeased with the unkempt, filthy state of their lab and suggests Declan hire Todd, who worked under Heisenberg and would know how to make quality meth. Declan adamantly refuses, however. With Declan no longer proving to be of any use, Lydia signals for Todd, Jack, and his neo-Nazi gang to come and deal with them. As Declan and his cook leave the lab to investigate, gunfire rings out. Todd eventually comes to retrieve Lydia, guiding her out of the lab as she closes her eyes so as to not see the death and carnage wrought upon Declan's crew. Jack personally executes Declan as Todd escorts Lydia away.

Back in Albuquerque, Marie suggests that Hank get ahead of the situation and reveal to his colleagues that Walt is Heisenberg. Hank, however, is reluctant to do so; he saw first-hand how his old ASAC, Merkert, was sacked after it came to light that his friend and associate, Gustavo Fring, was a meth kingpin. To reveal that his brother-in-law was the infamous Heisenberg would be career suicide. If he is going to reveal Walt's true identity, he wants hard, irrefutable evidence that will ensure his downfall, so he wouldn't have ended his career in vain. Until then, however, he has no choice but to bide his time.

When Hank goes back into work, he learns from Gomez that Jesse Pinkman is in custody yet again, having been brought in by the APD after throwing large quantities of money from his car. Hank sees Jesse sitting in the interrogation room in a state of catatonia, paying no heed to the officers questioning him, and asks to be given a few minutes alone with him...