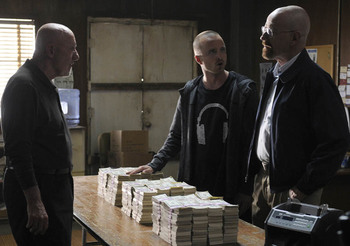 Mike visits Dennis Markowski, Gus' old laundromat owner, in prison and offers him money to replace his RICO'd hazard pay as long as he doesn't rat them out. With Gus dead, Dennis doesn't see how he can get his money back, but Mike reassures him he's working on it. He leaves and plans to visit other former associates to make the same offer.

Meanwhile, Walter moves back into the house, much to Skyler's chagrin. Walter later takes Mike to Saul's office. He and Jesse want to bring Mike in on their new meth cooking operation. Saul is hesitant, but is eventually talked into it. They discuss Mike's role in the operation—handling distribution while Walt and Jesse cook—then take tours of potential labs and finally come to a fumigation company. Cooking in the warehouse is not feasible, but they can use the exterminators (B&E artists with ties to Saul) as a front for cooking: the exterminators put tents up over the house, get the residents out of their homes for a time, then allow Walt and Jesse to cook within an isolated tent like those used in the back alley hospital where Jesse took Mike and Gus following their business with the cartel, and leave after turning on the foggers. This way, they stay mobile and can remain incognito. Before starting their first cook, Mike introduces the exterminators to Walt and Jesse, and one of them—Todd—makes a point to tell them that he found and disabled a nanny cam. They complete the batch without a hitch.

Walt meets Andrea and Brock at Jesse's house and appears unsettled to see the little boy he'd poisoned. He later starts a "friendly" conversation with Jesse about his relationship. He asks Jesse what his plans are "vis-a-vis honesty," then advises him that secrets create barriers between people and that everything Jesse's done is a part of him now, deliberately reminding Jesse of his guilt. Jesse worries about how Andrea would react if he told her that he'd murdered Gale, and Walt says that if she really loves Jesse, she'd understand.

Skyler gets into an uncharacteristically heated argument with Marie concerning Walt's upcoming birthday and her new smoking habit, which ends in Skyler screaming "SHUT UP!" repeatedly at Marie. Marie worries that Skyler's apparent breakdown was over a bigger issue and goes to talk to Walt. Walt tells her about Ted's accident and "reveals" Skyler's past affair as the reason for her breakdown, earning Marie's sympathy.

After the first batch is sold, Walt argues with Mike about distribution costs and is even less happy when Mike reveals he has to pay hazard pay to Gus' former associates to keep them from talking. Walt demands Mike find his own method of payment, but Jesse offers to let Mike take it from his cut. Walt refuses and pays his end with Mike promising this will continue for the foreseeable future.

After Mike takes his leave, Walt asks Jesse how he's feeling. Jesse starts to tell him that he broke up with Andrea, but Walt interrupts and clarifies that he'd meant how Jesse feels about the hazard pay. Jesse is okay with the situation because they are "owners, not employees" and get a bigger share of the overall profits. Walt is not so sure. Walt confides to Jesse about his thoughts on Victor, Mike's assistant whom Gus killed in the wake of Gale's murder. He explains that, at first, he thought Gus killed Victor to "send a message", but had recently thought of another possible reason: because Victor had tried to cook a batch of meth on his own, taking liberties and paying no respect to the chemistry. "Maybe he flew too close to the sun, and got his throat cut." Walt concludes before he departs, leaving Jesse concerned about what exactly Walt meant...