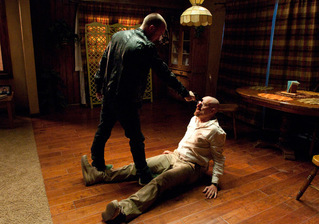 Walt and Jesse reach their breaking point.
"I have lived under the threat of death for a year now, and because of that, I’ve made choices. I alone should suffer the consequences of those choices, no one else. And those consequences...they're coming. No more prolonging the inevitable."
— Walter White
Advertisement:

Walt and Skyler frantically pack their belongings as the DEA arrives so they can be taken into protective custody. Walt, however, stays behind: under the guise to everyone that he was remaining behind to look after the car wash, he explains to Skyler that he is the only one being targeted, so the only way for his family to be safe is to be away from them.

As Walt sits alone at his house in contemplation, Hank reveals to his family and Gomez that he had been investigating Los Pollos Hermanos and Gustavo Fring and their connection to the meth trade on the down-low, which he thinks is the reason why he is being targeted. He convinces Gomez to pay a visit to Gus' industrial laundromat and look for evidence. As Gomez convinces the owner, Dennis Markowski, to let him scour the laundromat, Jesse and Tyrus remain silent in the superlab to avoid being found. Gus calls Jesse and explains to him that everything that was happening was a result of his "former partner". Jesse, however, insists that if Gus has Walt killed, there would be a problem.

After work, Jesse finds that he has several messages on his cellphone from Saul. He goes to Saul's office where, after having Huell pat Jesse down, Saul explains that he is getting ready to leave town after Gus threatened Walt's family.

While Hank continues to find nothing on Gus, Jesse returns home to think over the day's developments. He receives a call from Andrea that frightens him: Brock has been hospitalized! His condition is deteriorating to the point where he has been placed into the pediatric ICU. Jesse goes to pay Andrea and Brock a visit at the hospital. While stepping outside for a smoke, however, he finds that his ricin cigarette has gone missing. A frightening realization dawns on Jesse before he dashes back into the hospital and tells her to inform the doctors that Brock wasn't just sick: he has been poisoned with ricin!

Jesse then makes a beeline for Walt's house, where, after Walt lets him in, he takes Walt's revolver and points it at him. Walt tries to talk Jesse down, but Jesse refuses, believing Walt had stolen the ricin and used it to poison Brock as revenge for winning Gus' favor. Walt denies having harmed Brock and, as Jesse becomes angrier at his denial, suddenly breaks into laughter. Walt explains to Jesse that the one who actually poisoned Brock was Gus: Gus noticed the ricin cigarette with his security cameras, had one of his underlings take it, and used it to poison Brock in the hopes that Jesse would think Walt poisoned him. After all, Jesse was the only thing standing between Gus and Walt, and what better way to dispose of Walt then to trick Jesse into doing it?! To seal the deal, he bluntly tells Jesse to kill him if he thinks he's lying.

Jesse stays at the hospital overnight, staying outside the ICU. When Tyrus comes to bring Jesse back to the superlab, Jesse refuses, going as far as to call for security when Tyrus tries to force him. As Tyrus leaves, he calls Gus to inform him of the situation.

Jesse then sends a text to Walt as he prepares a remotely-detonated pipe bomb, informing him that he has Gus' attention.

Gus comes to visit Jesse to try to convince him to return to the superlab. Jesse continues to refuse, explaining that Brock had been poisoned and subtly implying Gus was responsible. Gus offers whatever aid he can to Brock and gives Jesse leave to stay at the hospital for as long as he needs and departs.

Walt is on the roof of a neighboring building, having stealthily planted the pipe bomb on Gus' car and now awaiting his return. He watches with binoculars as Gus and his men walk towards his car, but suddenly stops. Sensing something is amiss, Gus decides not to take his car and walks away, leaving Walt feeling panicked and helpless: if he had somehow known of the bomb, what hope has he of ever besting Gus? What hope has he of surviving Gus' wrath?