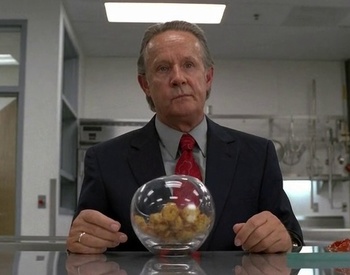 The Last Supper
"I'm sorry the kid doesn't see it, but I sure as hell do. You are a time bomb, tick-tick-ticking. And I have no intention of being around for the boom."
— Mike Ehrmantraut
Advertisement:

Peter Schuler, an executive for Madrigal Electromotive based in Hanover, Germany, glumly tries out various condiments his company's test kitchen prepared before being informed by his secretary that men were coming to visit him. Schuler asks her to stall the men, by telling them that he will see them shortly. He knows all too well that those men are with the police: Madrigal's connection to the American drug trade, and his own connection to Gustavo Fring and the meth trade in the American southwest, has come to light with the death of Gus. Seeing no other alternative, Schuler takes a portable emergency defibrillator with him into a restroom, and locks himself in. Carefully taking off and folding his clothes in silence, as his secretary, and then the men from the police knock on the door demanding to talk with him, Schuler calmly applies one pad of the defibrillator to his chest while ripping the other one off and sticking the frayed chord in his mouth, as he turns on the device and commits suicide.

Back in Albuquerque, Walt helps Jesse look for the ricin capsule that Jesse thought he had lost, but that Walt had really stolen to trick Jesse into thinking that Gus had poisoned Brock. Hiding the real capsule in an electric outlet in his own house, Walt slips a decoy containing table salt into a roomba that Jesse owned, then pretends to find and discard it. Afterwards, Jesse tearfully apologizes to Walt for suspecting him of using the ricin to poison Brock. Walt comforts him and tells him to remember that they always should stick together going forward.

Afterwards, the two meet with Mike. Walt plans to start cooking meth with Jesse again, but Mike wants nothing to do with Walt, seeing him as a ticking time bomb and wanting to give Walt a wide berth because he "has no intention of being around for the boom."

Hank and Gomez meet with Madrigal executives, and are assured that they would aid Hank in his investigation and that Schuler was a "lone anomaly". Afterwards, they go to a bar with Merket, who has been pushed out of the DEA due to his relationship to Gus and his failure to realize his true nature. Hank tells Merket that before the laptop was destroyed in the evidence room debacle, he saw that the laptop had powerful encryption on it, so it was unlikely they would've learned anything from it. As Hank ponders who gave Hector Salamanca the bomb that killed Gus, Gomez speculates that there may be an answer hidden in the offshore bank accounts Gus managed...

Meanwhile, Mike meets with one of the Madrigal executives: Lydia Rodarte-Quayle, who was also privy to Gus's drug empire. She gives Mike a list of eleven men in prison that Gus had been paying to keep silent about his drug business. Lydia suggests having them killed before they could implicate either of them, but Mike refuses and vouches for their integrity.

After the DEA grills Duane Chow, they bring Mike in. Hank is skeptical about Mike's claim to be the head of corporate security for Los Pollos Hermanos. Before Mike can walk out, Hank mentions his granddaughter, Kaylee, by name: one of the offshore bank accounts that Hank found was made in her name, with Gus stowing money away for her for some reason. Gomez makes an offer to let some of the money go to Kaylee in exchange for his cooperation, but Mike adamantly refuses, knowing there's no way he'd be allowed to leave behind his illicit money for his granddaughter...

As Walt and Jesse discuss starting their cooks up again with Saul, Mike is contacted by Chow, who claims the DEA seized his money, and wants to talk to him. Mike realizes something is amiss, and sneaks into Chow's house, where he finds and disarms Chris Mara, one of his former henchman, sitting near Chow, whom he shot in the head after luring Mike out. Chris admits that Lydia was paying him $30,000 to kill him, plus $10,000 for each man on the list. Resigned, Mike shoots Chris.

Afterwards, Mike travels to Houston and sneaks into Lydia's house. He corners Lydia in her own room and prepares to kill her. Lydia begs Mike not to shoot her in the face, so that her young daughter wouldn't be too shocked when she finds her body; but Mike dismisses her, stating that no one would ever find her. Lydia begins to panic, claiming that her daughter can't believe she abandoned her and threatening to scream unless Mike leaves her body where she can be found. Mike prepares to shoot her, but hesitates, and ultimately asks if she can secure him methylamine...

With nowhere else to turn to secure the hazard pay for his guys in prison, Mike reluctantly decides to join Walt's new cook operation.

After talking with Mike over the phone, Walt climbs into bed with Skyler. As Skyler lay motionless and scared of her husband, Walt kisses and molests her as he assures her that the guilt she felt over what happened to Ted Beneke would pass, because she did what she had to for the family...